Silk, harir, has attracted man for millennia with its unique qualities of lightness and strength,durability, lustre and brilliance. A silk strand has a greater tensile strength than steel, yet no other material drapes more luxuriously, or flatters the body more.

The production of silk has been carried out in China for at least 3000 years – it could be said that silk defines China. Indeed, the Chinese were known to the Roman world as ‘Seres’, producers of silk, and their land called ‘Sericus’, the land of silk. From this name is derived ‘sericulture’ the collective describing the art of silk farming.

Silk has always been a precious commodity, highly sought after by many countries. The Chinese, however, guarded the secret of sericulture very well. The third century monk, Dionysius Perigates, wrote of the Chinese, or ‘Seres’. “The Seres make precious figured garments resembling in color the flowers of the field, and rivaling in fineness the work of spiders.”

China’s social philosopher, Confucius, writing in 1st century BC tells how Xi Ling Shi, wife of emperor Huangdi, mythical ruler of China in the third millenium BC, picked a cocoon from the branch of a mulberry tree and, while having tea, accidentally dropped the cocoon into boiling water. When she pulled out the cocoon, a long thread unraveled. From this accident, the long white thread has traversed the world connecting past to present, orient to occident, and used as adornment for the living and the dead. Silk is the queen of fabrics but it all started with worms. 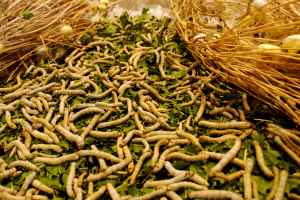