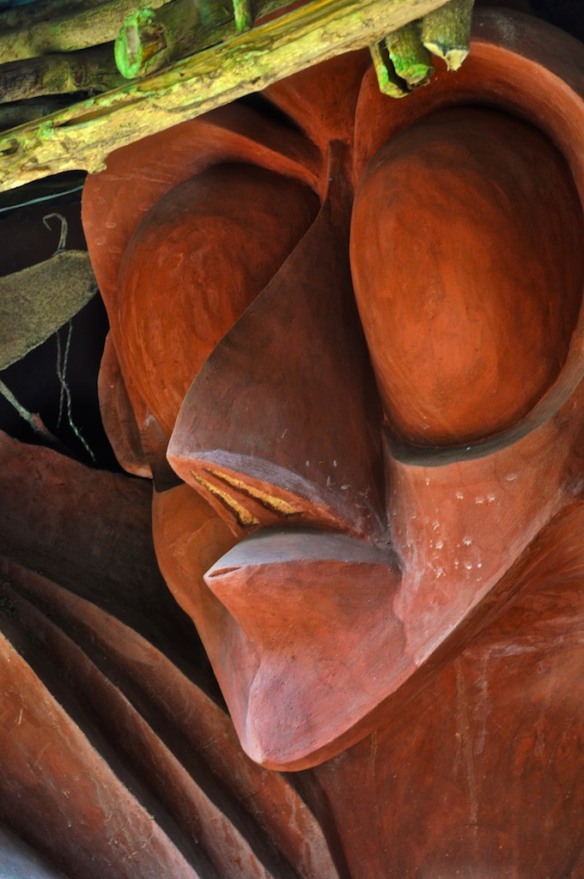 The òrìşà is like the many aspects in our unconscious: suffering, aggression, creativity, purity, love, wisdom… One can choose any of these roads towards the invisible, and make it alive in side oneself. – Susanne Wenger

The Òşun Osogbo Sacred Grove reveals physical manifestation of the powers of the goddess Òşun, goddess of living water.  The Òşun River flows into Osogbo town and meanders through the groves finally spreading into the Gulf of Guinea. The water is believed to possess curative powers for infertility and life’s controversies. As in life, undercurrents push and swirl.  It is wise to be aware of what happens in the background.

Within the Grove, the sculptures of Yoruba gods and goddesses are dedicated to Òşun. The groves, shrines and sculptures retain the intimate relationship between the Yoruba people, their art, religion and natural environment.  Òrìşà is ever present in all aspects of the gods.

Over the centuries, a highly developed system of governance from ruler to market existed throughout Yorubaland.  Within city-states, society was governed through a series of networks—tribe, territory, guilds, secret societies, and religious shrines.

In pre-colonial times, parts of Yorubaland were ruled by an Oba (king, second only to the gods) with a secular council of noble elders, elú. Today, traditional culture and religion is still recognizable and practiced but it fades with the passing of each generation.

Modern life puts its demands: ancestor’s stories and myths are no longer told, markets are full of Chinese goods rather than handmade local items; and the undisturbed rainforest that housed sacred groves are being up-rooted and sold to developers. In the traditional Yoruba religion, groves are sacred places reserved for rituals or shrines. One city that has managed to protect its sacred grove is Osogbo, the capital of Òşun State in southwestern Nigeria.

The city surrounds the ancient grove that is home to nearly 40 shrines and sculptures. Although the city pushes from all sides, the grove remains tranquil with ritual pathways winding through the forest that lead devotees to the shrines.

The Òşun Sacred Grove and Forest might have been lost to the world if it were not for the dedication of an Austrian artist, Susanne Wenger, who arrived to Osogbo in 1960. She studied the Yoruba language and religion and dedicated her life’s work to the restoration and protection of the shrines and grove.

Osogbo is the capital of Òşun  State, southwest Nigeria, and was founded approximately 400 years ago. The city is 250km north of Lagos and has the largest surviving sacred grove in Yorubaland.  Òşun  Sacred Grove and Forest is a UNESCO World Heritage Site.