We chant, we yell on a hot and sweltering Monday morning in May. None of us are happy to be here, the circumstances for which we march are too grim :

We Want Our Girls! 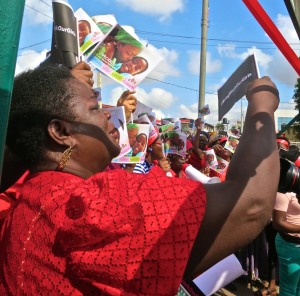 Over the weekend an email forwarded from one person to another gained momentum. Other mail queried: is it safe? is there security? can the traffic be controlled? what about area boys (local hooligans)?

The email stated that we would meet at Allen’s Roundabout in Ikeja and march 2 miles to the Lagos State House in Alausa. We should bring a white handkerchief and candles with circular paper around the stem so as not to burn our hand. 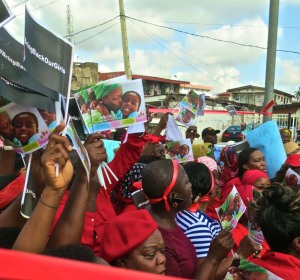 We were to wear red.

The program announced that we would begin the march promptly at 10 am, which for Lagos, we miraculously did. We were to deliver a formal letter of protest to Governor Fashola. Indeed, we did. At the State House,  speeches, singing, candle ceremony and waving handkerchiefs were on the agenda, it did not happen.

came together from diverse backgrounds—Yoruba, Hausa, Igbo, foreigners—ethnicity didn’t matter; religion didn’t matter. Race didn’t matter. We marched for every abducted girl; we marched for our daughters. If only our calls could bring just one girl back into the arms of her family, we would rejoice. But we know this will not happen.

If only our calls could kindle a fire under the politicians to spur to action, we would rejoice. But it has been 3 weeks since Boko Haram kidnapped 234 young girls from the Chibok Girl’s Secondary School in Bornu State in northeast Nigeria, and took them deep into the bush. We do not rejoice.

We yell louder: BRING BACK OUR GIRLS! 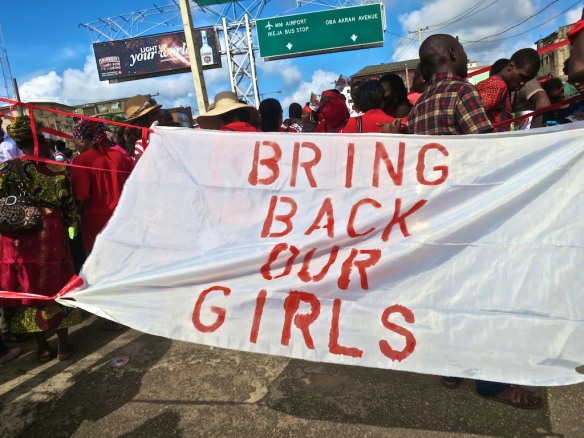 For weeks there is silence, there is blame, and the formation of a presidential committee; but, no action. We hear the girls have been moved to Chad and Cameroon; they have died of snake bites; they were forced to marry and sold into slavery.

But there is no action, only we…we yell louder, we demand, but we go home to our families to our dinners and still:

over 200 girls are missing.

8 thoughts on “#Bring Back Our Girls”