Yellow line from Xiahe to Tongren, Green line from  Tongren to Xuahue to Xinging. (This is part of a map that the hotel in Tongren kindly gave to me.) 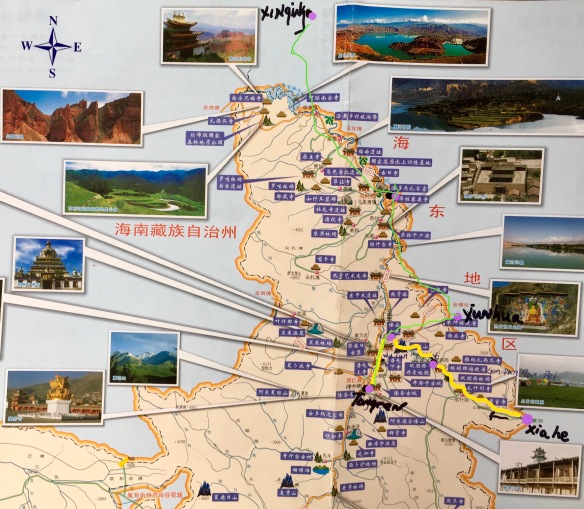 Understanding China is nearly impossible with just two weeks of travel. Everything is new…the sounds, the systems, the food…but trying to understand the complex history beyond my textbook education often leaves me struggling to sort out this varied and diverse culture and history. One dilemma is to understand how the Chinese government is structured on a local level. China is divided into huge provinces; the further one travels westward the more complicated it becomes. There are three autonomous regions (as I understand): Tibet, Inner Mongolia, and Xinghang. Then there are many autonomous prefectures that give minorities a voice in local governance. The areas I traveled through in Gansu and Qinghai Provinces are subdivided into autonomous prefectures that give minorities a voice in local government such as the Hui and Salar people (Muslims) and Tibetan.

Wu Tun Monastery in Longwu 7 kilometers outside of Tongren,

Wu Tun Monastery in Longwu 7 kilometers outside of Tongren

Leaving the Xiahe and continuing through the Song ke Grasslands, the road passes the Labrang Monastery, one of the six great Tibetan monasteries for the Yellow Hat sect. On the road to Tongren, the plan is to visit several Yellow Hat sect monasteries beginning with the Wu Tun Monastery in Longwu 7 kilometers outside of Tongren and at the end of the three days, the Ta’er Si (Tibetan: Laptah) Monastery, the place where TsongKhapa Lozano-draper (1357-1419) founder of the “Yellow Hat” sect of Tibetan Buddhism, is thought to have been born in 1357 in the area of Xining.

[In Llasa, Tibet, (China), I visit Ganden Monastery, which is at the top of Wangbur Mountain (4300 meters) . Here TsongKhapa came at 13 years-old to eventually begin the Yellow Hat sect and build the Ganden Monastery in 1409. (It was destroyed during the Cultural Revolution in 1959 and rebuilt in 1980.] 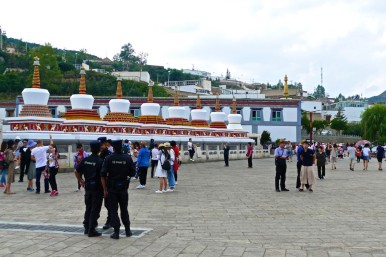 For explanation for the meaning of the colour is yellow for Yellow hat: http://study Buddhism.com/.en/advanced-studies/history-culture/Buddhism-in-Tibet/the-origin-of-the-yellow-hat )

The road to Tongren winds along steep mountains and descends into valleys and passes grasslands where nomads graze yaks and sheep for the summer months. Along the road, we stop at a mountain village named Shang Pen Xi, a village where Gen Dun Qun Pei, a scholar ( 1903-1953) who spoke eleven languages, was born and who is honoured in the town square. (I later see the same bronze statue at Ta’er Monastery in Xining.) The mountain walls and steep passes affirm why these area were left to develop on their own. 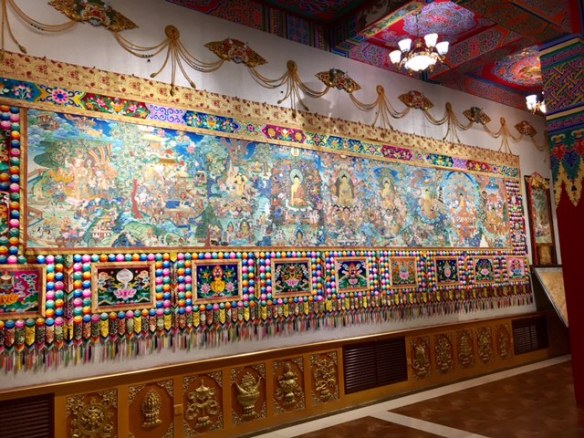 Tongren (Tibetan: Rebkong) is small monastic town, Qinghai Province. At the Wu Tun Monastery, I am introduced to thangka (Chinese: Regong) art which is a Tibetan Buddhist painting that depicts a Buddhist deity, scene, or mandala. The monks at Wu Tun Monastery have had a reputation for creating detailed images of Buddhist deities meticulously painted on stretched fine-weave canvas. Pigments are hand ground from brightly coloured stone such as turquoise, coral, lapis lazuli, gold and silver leaf ground with a resin. 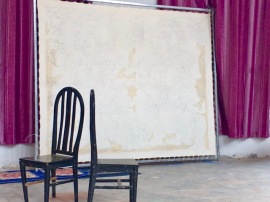 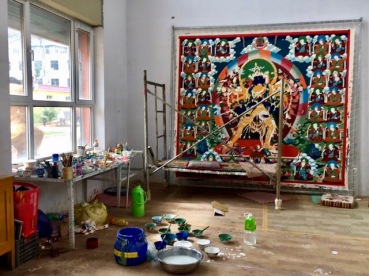 Most thangkas are intended for personal meditation or teaching historical events concerning Lamas or myths associated with certain deities. Tibetan Buddhist painting developed from widespread traditions of early Buddhist paintings that still can be seen at the Mogao Caves at Dunhuang on the Silk Road ( on my itinerary). Historically, most artists were monks. The thangkas were either commissioned or given as gifts. In Tongren, the art form spread to families and at least one male member of almost every family painted the thangka. Today women are allowed to paint thangka art. Rarely is a thangka signed.
I was fortunate that on the morning in Tongren by chance an art school, Qinghai Rebgong Art School, had opened for an official visit and we were able to enjoy the open doors of the school and visit the workshops. 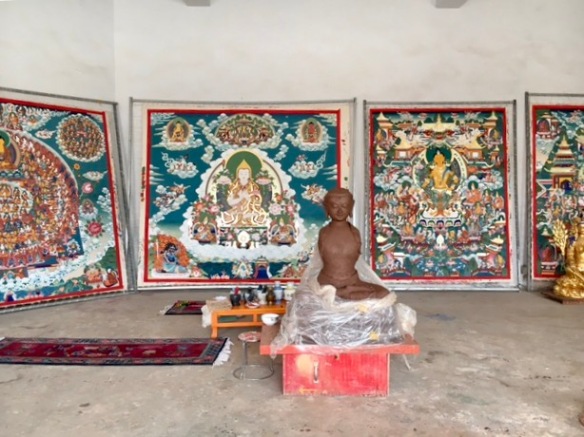 Embossed embroidery is another part of the thangka art form, however, little is documented about this art, which is often seen attached onto thangka paintings. I visited one artist, Qi Mao Tai, in her home and she takes me through the process of glueing pieces of silk on stiff paper, known as embossed embroidery, which she explains is usually commissioned.

Like a line drawn across the mountains, we leave the Buddhist area and see Chinese style minaret in the skyline as we enter a Muslim area. On the way to visit the 10th Panchen Lama’s birthplace, I see people constructing a mud brick building. Asking the guide if we could stop, we scamper to the site where a large group of farmers have gathered to build a house for a neighbouring family. I was interested in the construction material of mud, clay and straw, which is are materials used in the countryside of Egypt and Northern Nigeria.

In Xuahue, we have lunch with a Muslim family in their garden. Helen, the guide, explains that wheat is the main crop of the area and that Chinese come to this region for the wheat noodles. Of course, our lunch is yak stew with wheat noodles while we sip 8 treasure tea. But I could only count six: rock sugar, red chili, green tea, walnuts, goji bean, ju-ju bean. Boiling water is continuous, replenshing the bowl throughout the meal. 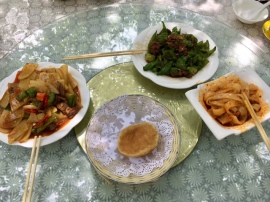 Xuahue is mainly populated by Muslim who are known as Salar. The Salar people mostly live in Qinghai-Gansu border region in Xuahue Salar Autonomous prefecture and Hualong Hui Autonomous Prefecture of Qinghai. Also there are Salar people in Xinjiang in Kazakh Autonomous Prefecture. All this matters to me because it is one of the great ancient Silk Road stories. The Salar people are descendants from the Salar tribe coming from Central Asia: Oghuz Turks. Two brothers Haraman and Ahmad lived in Samarkand area in the 11th century because of persecution from the local king, they and some family members fled with a white camel (a statue in the middle of the town today)

and a hand-written Quran (still survives in Jiezi Mosque in Xuahue). The group trekked though the northern Silk Road route and ended near Xiahe while others passed through the southern route and entered into Qinghai. They intermarried with Tibetan, Hui and Han Chinese, and Mongols to form the Salar group. The Quran they brought is preserved in Xuahue at Jiezi Mosque, which I tried to visit but because it was Friday, I was unable to view the Quran but was assured it was protected “in a special box where temperature and humidity are fixed and ultraviolet rays and harmful gas are kept out.”
We are fortunate to visit Xuahue Mosque named He Don ( meaning East River Mosque) built in 1485. In 1988 the mosque was put under heritage protection. Little information is known about this mosque even after a search in Chinese by my guide.
The main prayer is supported by massive wooden pillars, minaret has 6 cornerstone and 17 meters high. 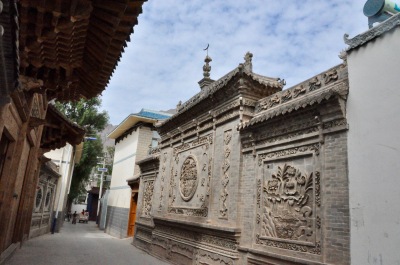 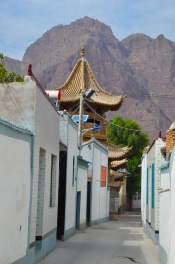 Then a three hour drive to Xining, the capital of Qinghai Province. Here the altitude is 7,000 feet. Xining has been an important trading center since the 16th century. Only a day to visit Buddhist monastery of Ta’er and stop at the 14th century Dongguan Mosque, which is said to hold tens of thousands during the Eid celebrations.

Xining is where I leave for Llasa, a 22 hour trip on an overnight train that would take me to the Roof of the World, over the 5000 meter Tangla Pass into Llasa at 3600 meters. I fall asleep listening to laughter of Chinese men in the corridor and soft Chinese music coming from another compartment. 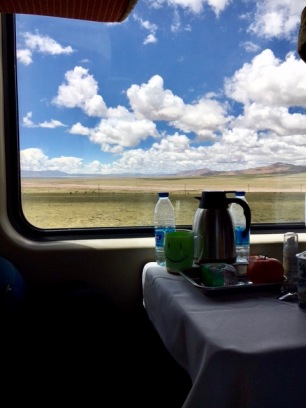 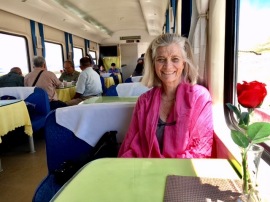 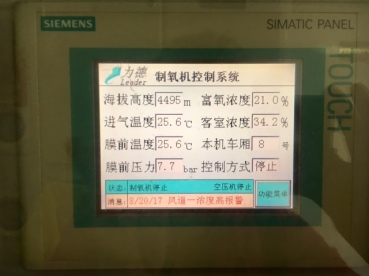 Back to the Wall...
A friend of mine asked if I was noticed by passerby. I think the curiosity is mutual so when someone says hello or wants a picture, I am quite happy to oblige. A lovely example of this was on the third day in Beijing when I visited a portion of the Great Wall of China. I had climbed up one side of a mountain and sat looking across the valley to the other side. What looked like a white ribbon wound its way down the wall. I was fascinated and wondered what group would be so organised as to dress in white and stay in single file. Soon they were out of sight and I descended from the stairs as well. When quite by surprise , I found myself in the midst of a group of girls all dressed in white and quickly realised they were indeed the ribbon across the Great Wall.

ps. Length of Great Wall: “At its height the Ming’s Great Wall covered some 6300 km. Hundreds of side spurs and secondary defence walls protected further valleys, in total, an incredible 50,000 km of wall was built. (-from The Silk Roads by Paul Wilson). In a couple of days I will see the end of the Great Wall, ……km from Beijing. 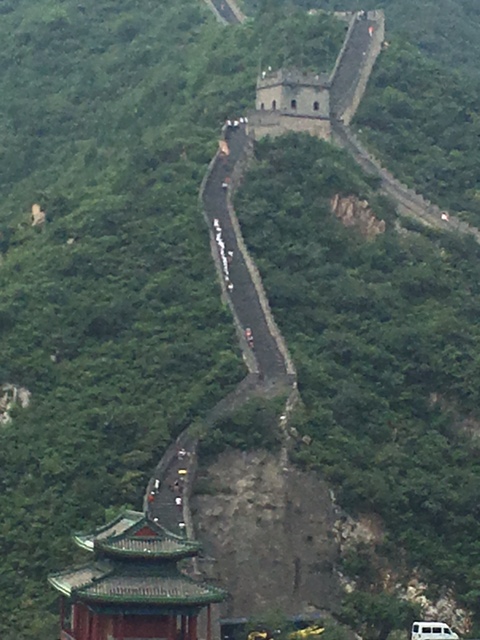 Traveled kilometres from August 6th to August 25th, 2017, in China:

(all rights reserved, copyright 2017. To copy or re-produce photography and/or writings, written permission from Lesley Lababidi is required)