On my way to the train station after five days in Llasa, (3600 meters) the capital of Tibet Autonomous region in China, I had completed a circle …starting and ending… at the same place. But there is more to the story…my Tibetan Buddhist guide, Tenzim, would approve. 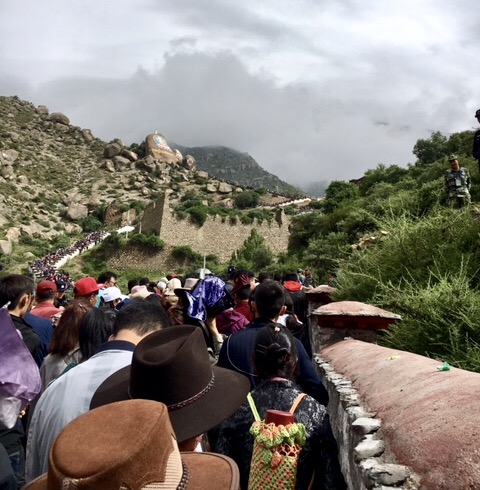 After a 22 hour train journey from Xinging to Llasa,  Tenzim discussed the Yogurt Banquet Festival known as the Shoton Festival, particular to Llasa. It would begin in the morning with pilgrimage to the Sera Monastery and Drepung monastery. ‘Would I like to go?’ We would join pilgrims from all over Tibet to complete an uphill climb to see the unfolding of a 37 by 40 meter thangka (see previous post for explanation of thangka) from high above the Drepung Monastery. It would mean an early start and possibly 4 kilometre walk. ‘Would it be too much for me in this altitude?’ My only question was, ‘what time?”

The Shoton Festival, also known as the Yogurt Banquet Festival, has been held since the 11th century (this date may vary). The Shoton Festival, usually held in late August or early September, it is the second most popular festival in Lhasa, only following the Tibetan New Year. The origins was on the occasion when farmers would offer yogurt to monks who had finished meditation retreats after staying in the caves and shelters to avoid walking on summer insects and unintentionally killing the tiny critters. 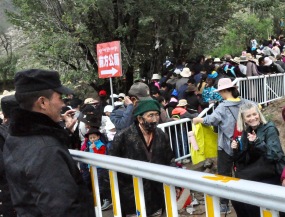 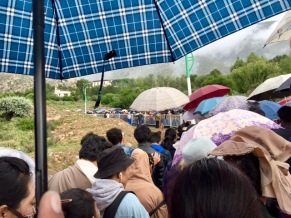 A drizzly morning welcomed us as we joined a long line of pilgrims, many of whom had started at 4am to be present for the once a year unrolling of the thangka. The approach to view the thangka began far from the mountain; Chinese army and police lined the route for crowd control. As we wound up the mountain paths I looked backward and forward at the sea of people from all walks of life. Elderly women and men pushed past me, young children squeezed between the skirts and pant legs, young mothers carried babies on their backs in back packs made of a blanket and cinched with a wide rope under the baby bottom. The solemn chanting of mantras and reciting sutras in a low hum helped me with my own steps forward and pulled my feet upward. People looked at me, greeting me with a smile: ‘hello’…’where are you from?’…I knew I was welcome on their path. 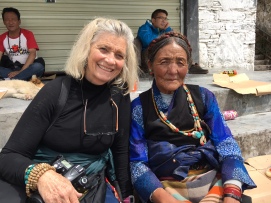 Me and a Tibetan woman resting 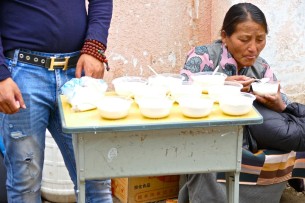 Making it to the top (very grateful for the cool, cloudy weather) and standing below the massive painting on silk thangka to which more than 40,000 people had come to pay their respects, I had this rare opportunity to participate in a sacred religious event. Tibetan ceremonial scarf made of white silk that represents respect, kindness and good wishes are thrown towards the thangka. People buy incense to add to the incense furnace. We stand under the grand thangka and admire it as an ancient work of art that has been preserved for four centuries. 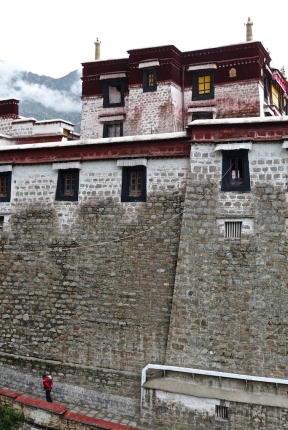 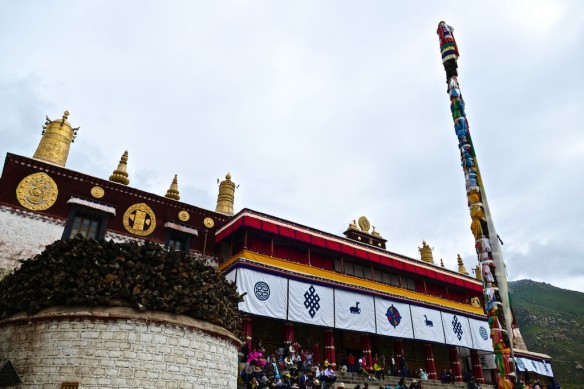 Then onto tour Drepung Monastery (founded in 1416 by Jamyang Choge Tasha Palden (1397-1449), one of Tsongkhapa’s, founder of Yellow Hat sect, disciples – see previous post). A visit to the kitchen, the familiar yak butter fragrance permeates the room where massive ovens and vats are used to prepare daily food and drink for the monks. More stairs to descend and we rest with Tibetan families who have made this devotional journey. Then the walk back to the city…round trip 13 kilometers (at 3,600 meters). A welcomed late lunch of Yak curry and naan and then to the hotel to soothe strained muscles!

My seat near the stage!

The next day at the Shoton Festival, there is another opportunity to enjoy the local festivities. Tenzim explained that the Tibetan opera would open at 11 am in Norbulingka Park ( built in the middle of the 18th century during the reign of the 7th Dalai Lama and served as the Summer Palace of Dalai Lamas). Tenzim warns that only the elderly enjoyed Tibetan opera because they are the generation that understand the symbolism and intricate stories. So he doesn’t expect me to stay long. Seven hours later…. 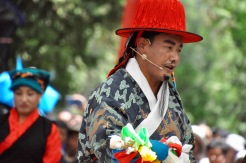 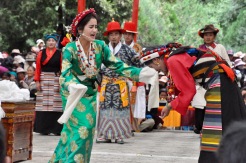 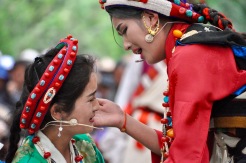 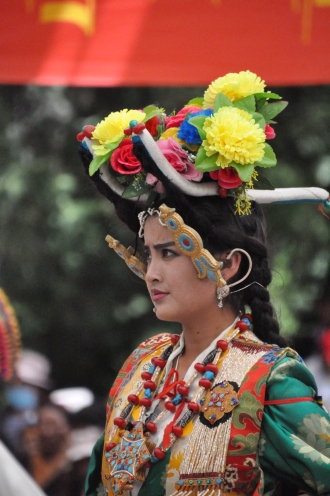 My preconceived idea of going to an opera is a theatre with chairs and intermission. I was in for a new cultural experience when Tenzim positioned a small stool near the outdoor, tent covered 360 -degree stage. I would soon experience a non-stop opera, no intermission for musicians, actors, or audience. The musicians played continuously and actors came and went as new characters were introduced to the story, no bathroom break, either, as the opera was so crowded that returning to my space would be impossible. 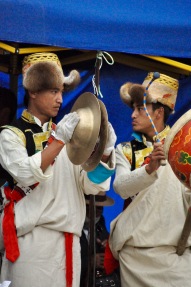 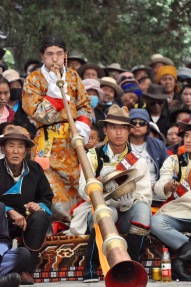 I sat in a crouched position these hours completely enthralled as those seated around me. Tibetans from the city and countryside sat on the cold stone floor or on blankets or on small stools. They brought large thermos of tea and boxes of yak yogurt biscuits, dried fruit and meat. The hours flew past within the midst of joy and excitement, laughter, and tears, as we watched the opera. The ever present prayer beads glided between fingers and hands, an intractable part of their lives in anticipation and appreciation of the performance. 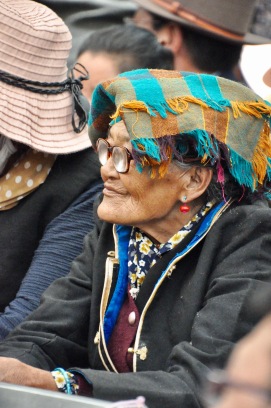 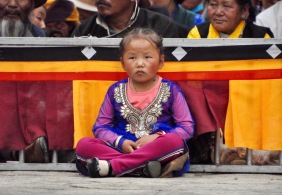 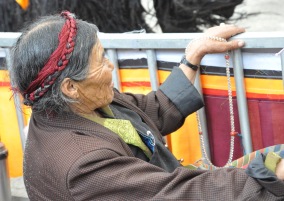 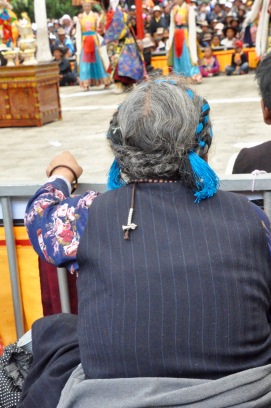 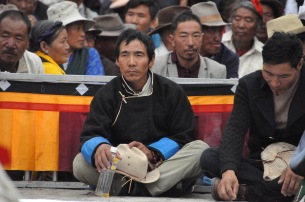 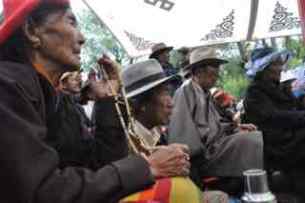 Dating back to the 14th century, the performance style epitomises Tibetan culture, combining drums, cymbals and bells, piercing recitatives punctuating choruses, villains, leaping dragons, swirling ladies with long silk sleeves. In 2006, the Tibetan opera was awarded national intangible cultural heritage status and was added to the UNESCO World Heritage List in 2009. Most of its repertoire is based on Buddhist stories and Tibetan history.

Back to the required tourist itinerary…places one must see but, honestly, paled in comparison of the last two days that immersed me in the living culture. Nevertheless formal systems are the foundations of traditions and culture to understand a society and its history. Potala Palace’s ancient architectural complex is considered a model of Tibetan architecture. Located on the Red Hill in Lhasa; it is 3,700 meters above sea level and covers an area of over 360,000 square meters, measuring 360 meters from east to west and 270 meters from south to north. The palace has 13 stories, and is 117 meters high and my knees felt every step!

Monks Debate at Sera Monastery, the younger monks sit on the ground, each with a monk above him, grilling him on Buddhist doctrine and philosophy. Each question is presented with great thoughtfulness and special gestures, and when it’s time for the seated monk to answer, the standing monk claps sharply. If the answer is judged to be wrong or incomplete, the standing monk berates the seated monk. 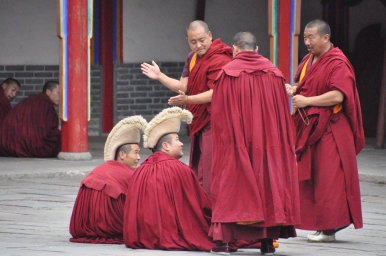 Ganden Monastery is at the top of Wangbur Mountain (4300 meters) . Here Tsong Khapa came at 13 years-old to eventually begin the Yellow Hat sect and build the Ganden Monastery in 1409. It was destroyed during the Cultural Revolution in 1959 and rebuilt in 1980.

The Jokhang Monastery, built in 648 AD, the Tang Dynasty in the style with characteristics of Nepalese and Indian architecture. can claim to be the center around which the city of Lhasa developed. to name a few. It was built in Tang Dynasty. The statutes of Songtsen Gampo, Princess Wencheng and Princess Chizun, another wife of the Tibetan King are enshrined in side halls. 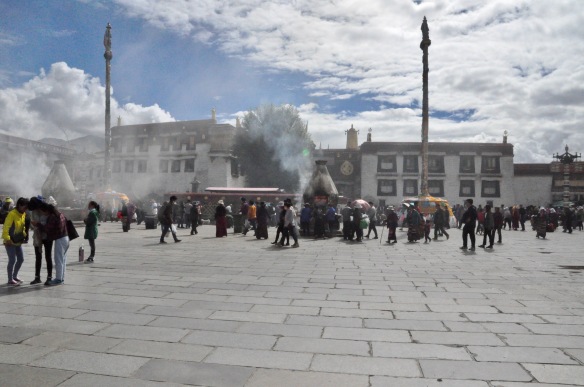 Living crafts, people sitting along alleyways or within small stores, making their craft that are used in daily life is not seen often in the West. In the Tibetan autonomous region, the making of articles used in daily religious life can be found near a monastery or in the market place. For example, in Llasa, one sees young men sitting in lotus position, eyes inches away from the canvas painting the intricate design of a thangka (see previous post); or printing sutras on wooden tables to be place in a prayer wheel; or carving small statues, or moulding object such as the work of Mr. Luzhin Gyang Tso. 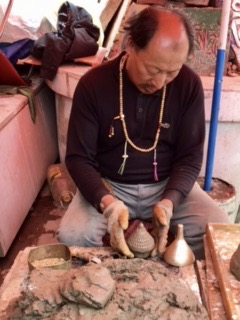 He has been making these objects for the last 14 years, called Taza. They are containers to place ashes of loved-ones after a Tibetan sky burial. These small containers have dried barley blessed by the Buddha at their centre with each point representing 108 Buddha stupas. 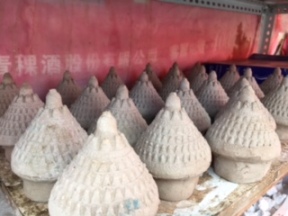 They are bought to be placed on a mountain after a love-one has passes away. Along with these, medallions are positioned at the mountain tops to the Buddha of wisdom and compassion.

Closing the circle of my Llasa visit, we end at Jopoli, the Holy Mountain, not on a tourist itinerary. As I began in the procession to pay respects to the 400 year old holy thangka, I end at the holy rock of hundreds of Buddha rock painting. Here is the place where 100 yak butter candles are lit, here, in this quiet square that belongs to a Buddhist nunnery. Young and old people prostrate, and give offering to their ancestors, it is the end of a clockwise circle walked each morning of prayers and prostration. I sit in a shady corner feeling a part of something special; a universal expression to something greater than an individual, a spiritual energy, a dedication to beliefs to make sense of life. 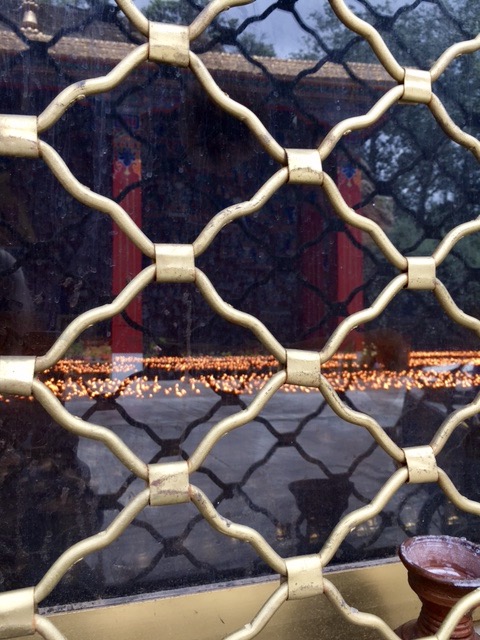 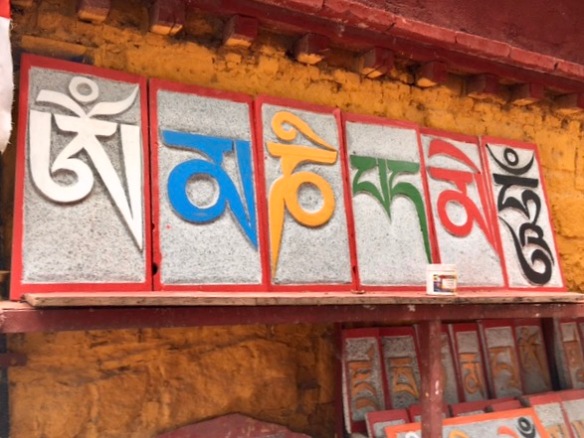 Tenzim, Tibetan guide, and I at Barkhor Market the old market of Lhasa that encircles the Jokhang Monastery.

(all rights reserved, copyright 2017, To copy or re-produce photography and/or writings, written permission from Lesley Lababidi is required)