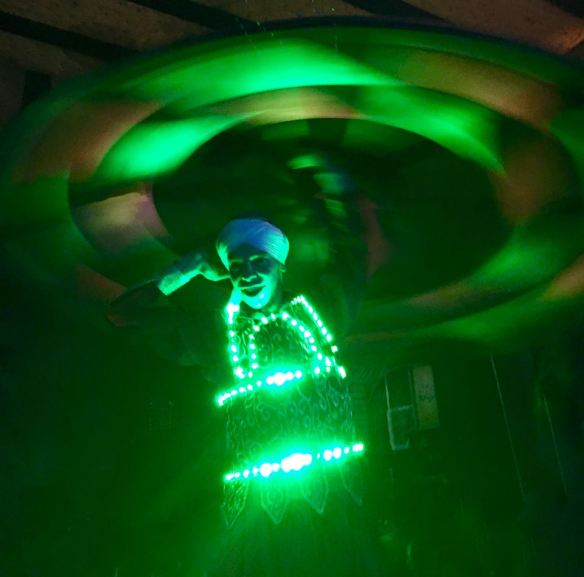 Thursday nights in Cairo are filled with parties, dinners, weddings but if you have a couple of hours and an adventurous music lover, check out a variety of folk music brought to the el-Dammah Theatre by Zakaria Ibrahim, researcher and founder of El Mastaba Center.

Zar and Sufi music and singing presented by the exceptional Abul Gheit Darawish (dervishes) band, provide an unusual evening – a spiritual experience, and with Tanura dance (Egyptian version of the whirling dervishes).

The Abul Gheit Darawish band which is led by Ahmed El Shankhawy, joined El Mastaba Center in 2011, and presents a mixture of Sufi and Zār music with unique rhythms. The name, Abul Gheit, refers to Sheikh Hassan Al Gheitani, whose tomb is located in a small island in El Qaliyubia Governorate. Sheikh Hassan attracted many devoted dervishes and followers in the early part of the 19th century.

The repertoire of the Abul Gheit dervishes is comprised of Sufi songs, many of which praise the qualities of their holy Sheikh. Over time, their songs fused with the Egyptian and Sudanese Zār music which was practiced in the Arab El Mohamady area. Darawish Abul Gheit are still known for their Zikr nights (Zikr being the Sufi devotional practice, including songs and movements).

Admirers and followers who attend the Zikr nights believe in the ability of this music to inspire spiritual awakening and effect healing.

The band joined El Mastaba center’ bands to revive an ancient Egyptian art: upper Egyptian palm clapping. Which goes back to the time of the pharaohs, and the engravings manifesting this art can be found in many temples and tombs. For instance, it can be seen in al Assasia tombs in the west bank of Luxor city.
As for the roots of the art explained by the head of the band Mahmoud Eledfawi, who started to perform since he was a little child and developed his skills along the way, he says: “this kind of art is not an walk in the park, as it depends on improvisation and creativity at the same time through a group of youth reciting a couplet to the lead singer (which is called a Column: a part of a quartet) and then the lead singer picks up from there, and commits himself to the same subject and assonance accompanied by the rhythm of the palms, sitting on one or more sofa and after a while they stand up facing the singer(s)”.
And the singer begins with a Sufi enchanting for the prophet’ sake, followed by a ballad describing his environment and the state of the lovers, and the palm clapping youth recite a couplet, and the tempo is decided by the speed of the clapping, and then they start to sway in a synchronized way led by the line alpha dancer.
The art of “Kaff” includes all of the social affairs.
The artist: Mahmoud Eledfawi descending form Aswani roots started to perform from Idfo district in Aswan and is on a journey to spread this kind of art to the world.