Last year my plan was to end my China trip in Kashgar, go over the border into Kyrgyzstan by way of the Torugart Pass (elevation 3,752 m (12,310 ft) , then onto Tash Rabat, Naryn… But at the last minute the border was closed and I rerouted the trip by plane from Urumchi, China to Bishkek. But this year, I was able to cross the Torugart Pass and enter Xinjiang Provence. But not before, I fell and broke my professional camera…so pictures from now will be from my IPhone 😦

Western China, the Xinjiang Provence is a fascinating area not only because of the northern and southern Silk Road routes that skirted the Taklamakan Desert but also that much of the Great Game was played out with Kashgar as the pivot point for explorers and adventurers. Xinjiang Provence borders with countries – Mongolia, Russia, Kazakhstan, Kyrgyzstan, Tajikistan, Afghanistan and India. This area of China is Central Asia with customs, food, traditions, religion, and language similar with its neighbours. It is the convergent point of varying cultures and empires, Chinese, Turkic, Mongol, and Tibetan empires; furthermore, it is home to the majority of the world’s Uyghur population.

Kashgar, officially known as Kashi is the regional capital of this Xinjiang Provence. The Prefecture of Kashgar borders with Afghanistan, Kyrgyzstan, Pakistan, and Tajikistan and is China’s western most city which lies on the edge of the Taklamakan Desert.  Kashgar is a city of great ethnic diversity, including the Uyghur, Han Chinese, Kazakhs, Hui, Tajiks, Kyrgyz, Mongols and Russians. The city has 2000 years of history and is located where trade routes met and continued to China, the Middle East, and Europe.

I had expected to find Kashgar a maze of adobe houses, city walls, fortresses, mud walls and narrow alleyways with a vibrant, traditions of the Uyghur community. But those days are gone. I was told I was 15 years too late. (Read Tony Steward’s Kashgar Sunday Market 1995 for what Sunday Market once was.) The Chinese government concerned about potential earthquakes and unsafe structures began to remove all traditional housing and provide new housing for each family in high-rise , earthquake-proof apartment complexes. Some areas were renovated to the original look of the old city that give an idea of how these areas once looked.

But the streets take on an eerie silence with much of the traditional workshops selling tourist trinkets from Taiwan and Pakistan rather than authentic working/living areas.  Though disappointed that did not stop me finding lots to do and see!

Some must see sites: the British Consulate and Russian Consulate, two Kashgar institutions where diplomatic intrigue of the Great Game of the 19th and early 20th century was played out. After reading  “Foreign Devils of the Silk Road”, I first asked my guide if there was anything left of the two embassies. Though they are both hidden: the British residence behind a hotel and converted into a Chinese restaurant and the Russian Consulate still maintaining the atmosphere in a quiet courtyard is a boutique hotel. Both consulates  were built in 1890 and in operation until 1949 when the People Republic of China took control. Within these walls, the consuls  were listening posts of the Great Game by expanding routes, military and political manoeuvres. Explorers and archaeologist used these two consulates to take breaks from their conquests and discoveries of the Silk Road.

Sir George Macartney (1867-1945) British consul-general in Kashgar founded the British Consul in 1890. He and his wife, Catherine Borland, remained in Kashgar until 1918.  The Consulate became a place to rest for adventurers like Aurel Stein, Paul Pelion and Sven Hedin. After WWII the Consulate- General was revoked and transferred to British India  and was changed into “India-Pakistan Consulate”. Pictures of Sir George Macartney and Lady Macartney and family remain at the entrance of the residence. Lady Macartney turned the British consulate:

“into an island of European civility, with cuttings from English gardens, exotic flowers and pear and apple trees. Ping pong tables were set up indoors and tennis courts were built nearby. Brahms records provided melodious lullabies and eventually a piano was shipped over the mountain passes”.

She also was known to have assisted the archaeologists who found the library at Dunhuang.

The Russian consulate, in the spring of 1893 according to a treaty between China and Russia signed in 1881, started architectural work in the old town of Kashgar to build a consulate. This consulate covered an area of 15,000 meters. In the compound, houses were built in conformity in Russian old architectural style. At the end of 1918, China and Russia broke diplomatic relations, its staff escaping to Russia or other countries. In 1925, China and Soviets resumed diplomatic relations but in 1956, the Soviet Union consulate in Kashgar was cancelled.

The tomb of Yusuf Khass Hajib Balasaguni (1019-1085)offers respite from tourists in the gardens and mausoleum of this Uyghur poet, philosopher, statesman, and vizier. He was born in Balasagun in modern day Kyrgyzstan but moved to Kashgar around 1069, there he wrote the book Kutadkau Bilig – Wisdom of Happiness, which explains social, cultural and political lives of the Uyghurs during that time. 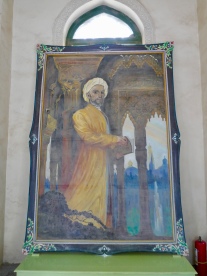 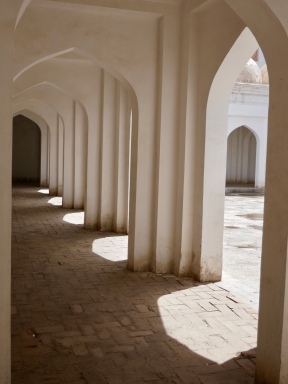 I was invited to spend an evening with an Uyghur family who opens their home to travelers. The dinner is in a traditional Uyghur dining room that is only used for guests and for the family at festival times. The three most important food to welcome a guest are two types of rock sugar and semsa, a fried bread. After that, dumpling soup and plov (pilaf) are main course. The table is decorated with colorful china, fruits, nuts, sweets as everything a family has is put on the table to welcome the guest. 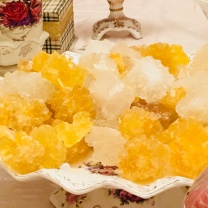 The evening is complimented with a chapter or story of Dolan muqam music played by masters who have traveled over 100 kilometers to perform this evening, special permission had to be obtained so this is one of the most unique performances that one can see these days in Kashgar. 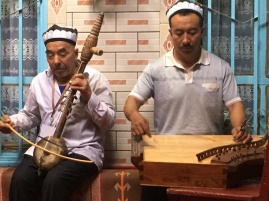 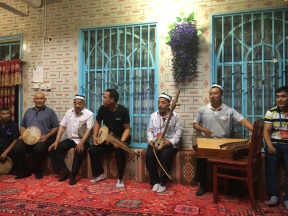 Dolan muqam is a 1000 year old  artistic form of the Uyghur’s expression integrating music, literature, dance, drama characterised by unrestrained singing that reflects their ancestors hunting lives and culture. The accompanying musical instruments include satar, tambur, dutar, rawap, kalun, tambourine. There are various themes, and rich tones, the story telling and songs are passionate. The music was designated by UNESCO a part of the intangible heritage of Uyghurs. This group has performed in Europe on several occasions. The oldest of the group says, “old people in Europe look the same.”

In Kashgar, it is obligatory to visit Id Kah Mosque built in ca. 1442 by Saqsiz Mirza but other structures were built from 996 CE. It is the largest mosque in China and is reported that up to 20,000 worshippers come to the mosques on days of the feast. If you read on any site that women are not allowed, when I arrived, everyone was allowed to visit except during Friday prayers.

Afaq Khoja Mausoleum is a complex built by the Khoja family from 1640 with halls, madrasah and mosque later added. Within the mausoleum are the remains of Yūsuf and many of the Khoja family are interned there. The Khoja family  arrived from Uzbekistan and the family ruled the region in the 17th and 18th centuries. It was told to me that Muslim families who could not go to Mecca for the Haji could receive the same benefits if they made a pilgrimage to this spot 8 times. (I don’t know if this information is true or not.) 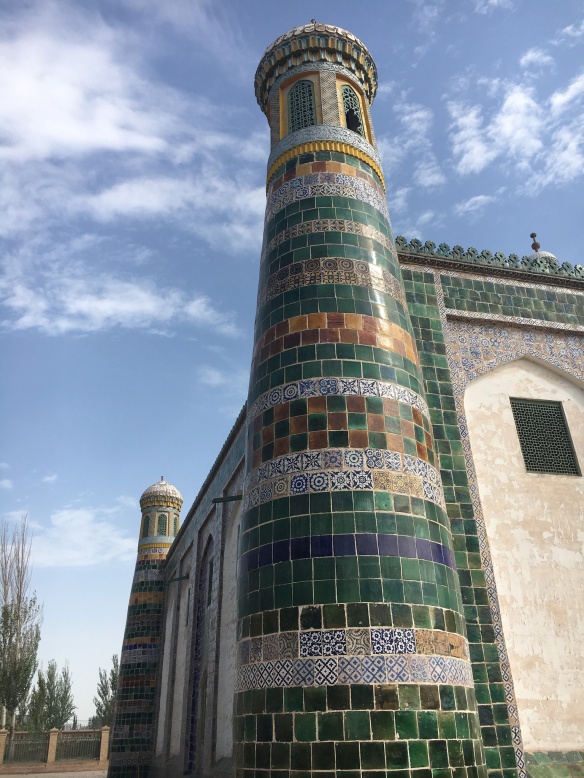 The tiles are mostly original and made by different artisan families. The Islamic architecture is beautiful and the rose gardens and cemetery allows for peaceful contemplation.  Read more at:

If you have ever heard of Kashgar, it is most likely because of its renowned Sunday Market. There are some fabulous photographs and descriptions about this market on the Internet but, unfortunately, the market’s glory days  has passed. It has been reduced to a simple livestock market where farmers hope to sell their sheep, goats, horses, donkeys, yaks and yattles (breed of 50-50 yak and beef)

There are reasons for the reduction of activity in the market but I won’t get into that here. However…good news…I went to find the men who pull dough to make noodles … and I was not disappointed.

Below are various pictures from the Kashgar market and around the town: