On the train again…a 5am train ride from Kashgar to Hotan that skirts the Taklamakan Desert deposits me after 6 hours in this Uyghur city on a chilly rainy day.

The driver said it was most unusual weather as the summer is hot and dry. I wondered from where this cool air came but had no luck with my inquiries so I just accepted the fluke of weather conditions was to my advantage and enjoyed the cool day, particularly as I was headed into the Taklamakan Desert (tark, “to abandon” + makan, “place”)to visit Rawak Vihara, a ruined Buddhist stupa (a commemorative monument representing the passing of the Buddha) and monastery complex c. between the 3rd-4th centuries CE located northeast of Hotan.

. According to the archeological accounts, sand covered the temple and entire area.

“Rawak means “high building” or “steep house” in Uyghur, and vihara is the Sanskrit term for “monastery.” * 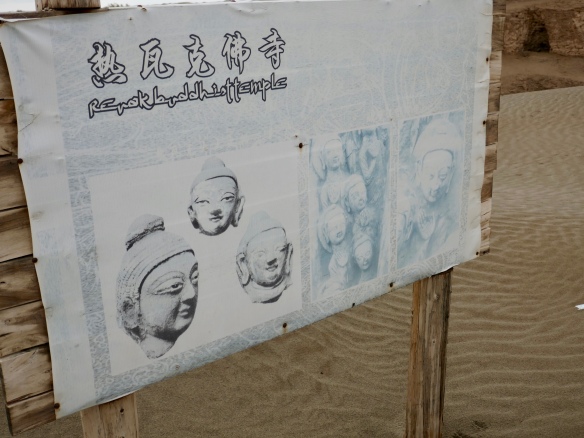 In Stein’s accounts, “the stupa walls were completely covered with sculptures of Buddhas and Bodhisattvas, life-sized or a little larger. The coloring of the sculptures was of a deep red.” *

Reconstruction of what the original stupa might have been. It was covered in sand when Stein began excavating.

Between 1901 and 1906 Aurel Stein excavated this and wrote about his remarkable finds at this temple on his first trip to China. He found relics that showed the influence of Buddhist religion and Indian cultures. He hid his findings to one day return and when he did return most of what he hid had been stolen. (Read: Foreign Devils on the Silk Road for more information about the excavations of Stein. *Above information from http://www.iranicaonline.org/articles/rawak-vihara)

Hotan is the modern city within the ancient Kingdom of Khotan that is on the southern edge of the Taklamakan Desert in the Tarim Basin of modern Xinjiang Provence.

Kingdom of Khotan was one of the many small states found in the Tarim Basin that included Yarkand, Turfan (see Foiled at the Finish), Kashgar. To the west were Central Asian kingdoms of Sogdiana and Bactria ( see Sogdians and Soviets). China and Tibet were powerful neighbours. In antiquity, and especially before the rise of Islam in the 9th-10th centuries CE, the region of Khotan was Buddhist for over 1000 years and mainly populated by East-Iranian-speaking Saka tribes until it was conquered by Muslim Kara-Khanid Khanate in 1006. (Read more at https://en.m.wikipedia.org/wiki/Kara-Khanid_Khanate).

Built on an oasis, Hotan mulberry groves allowed the production and export of silk, in addition to the city’s other major products such as its famous jade from the White Jade River.

Hotan was once famous for its silk  production. Unfortunately, sericulture is no longer a lucrative business for traditional techniques of making silk textiles. In Xinjiang Provence preparation of silk for weaving is called ‘atlas’. This technique is used throughout Central Asia. The textile design is called  ‘ikat’ which is when  cotton and silk threads are combined the material is called ‘adras’. If the textile is purely silk, most often, the name is ‘atlas’. Ikat adras and atlas have been practiced throughout Central Asia for a 1000 years. It is an expression of material cultures that spread from (modern-day) Uzbekistan to Xīnjiāng Provence. The inspiration of the designs is from the shapes of flowers, leaves, and fruits, pomegranate the most revered. The process in Hotan silk factory is the same as explained in the Obelisque article : The Ikat of Uzbekistan

The 1300 year-old walnut tree attests to walnut cultivation over millennia. Here, walnuts are revered for not only health benefits but also walnuts were used as trader-travelers moved across trade routes from China to the Mediterranean Sea. 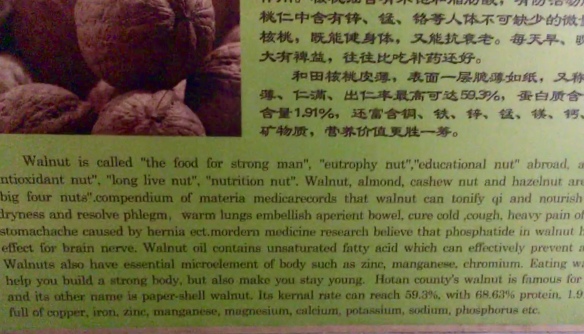 Along these routes travelers planted the nutritious and portable walnut. Hotan climate, water resource and fertile land was ideal to grow walnut trees.

Hotan night market topped off my stay in Hotan with sweet tangzaza (sticky rice with syrup and yoghurt). Some night market delights: 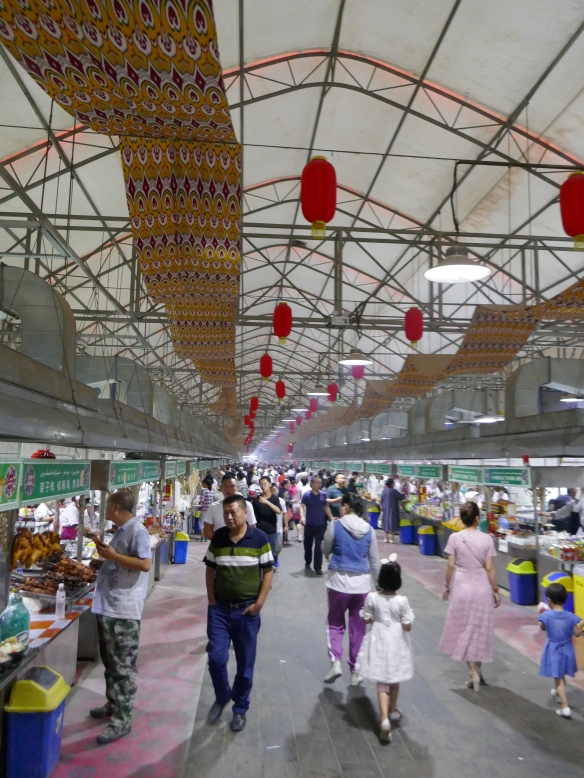 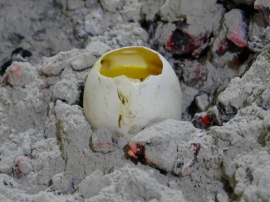 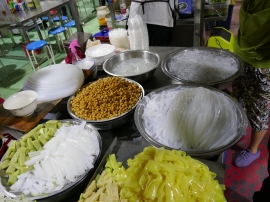 In the video, the song asks, “What makes you happy?” The refrain, “The night market makes us happy.”

6 thoughts on “Hotan, the Taklamakan and Walnuts”