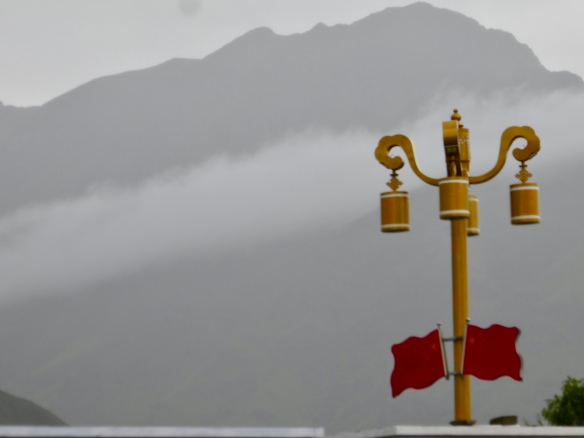 The last 8 days of this five week exploration of the lesser routes of the Silk Road in Central Asia and China was spent in the Tibet Autonomous region. Though Tibet is not an official route of the Silk Road, movement between Central Asia, Tibet, India, and China is well documented. Through Central Asia going eastward, one comes in contact with  remnants of the Buddhist religion left from monks and pilgrims crisscrossing the land. So to continue to understand the movement of material culture associated with the migration of peoples, I returned to Tibet Autonomous region to have a broader understanding; however, the region’s history, religion, and culture is rich and complex, this journey and humble post only serves as a grain of sand in this ancient land. 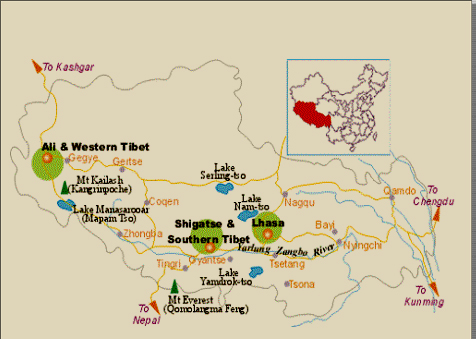 Diverse cultures and traditions are fading fast with global homogenisation favouring technology, so it is personally important to experience traditions, culture, food, and languages in a local context rather than in a museum (though I do love collections) or a theme park, (the latter seems to becoming a trend.) Furthermore, last year when traveling through China and Kyrgyzstan my guide/translators became my friends, so I was keen to re-connect in person with Tenzin in Lhasa as I did in Kyrgyzstan with Farhod, and Helen in Xining.

In this high mountain region of Tibet, arriving at Lhasa Airport at 2.5 miles above sea level was the lowest elevation this week. 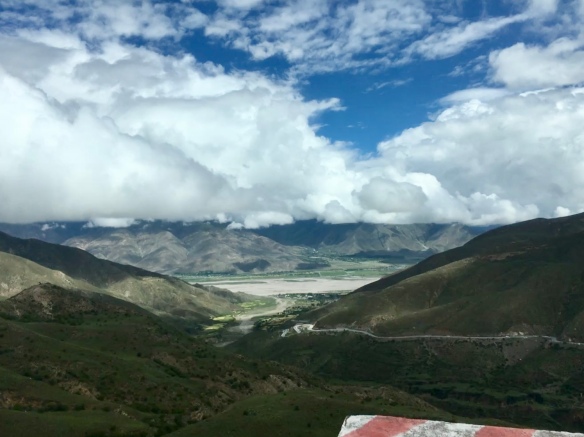 Climbing to the ‘roof of the world’

Fortunately,  the altitude doesn’t bother me, except, I will admit to having Tenzin carry all my things and stopping often to catch my breathe! We head out of the airport to the city of Tsetang. We drive along the muddy, flooding Brahmaputra River also named Yarlung Tsangpo River (flows to the Bay of Bengal) that, this year, has damaged roads and bridges to the high volume of rain.

If one is to begin at the beginning of Tibetan Buddhism, a visit to Tsetang is vital as it is known as the cradle Tibetan’s civilisation. Tsetang is the capital of ancient emperors of Tibet as Xi’an is the first royal capital to the Han Chinese. Tsetang is overlooked by Mount Gongbori one of the 4 holy mountain in Tibetan Buddhism. One of three caves in the mountainside is said to be the birthplace of the Tibetan people who resulted from the mating of a monkey and a beautiful ‘she devil’ or monster ogress.

Samye, Tibet’s first monastery, is located only 30 km from Tsetang and was founded in 779 CE by King Trisong Detsen. 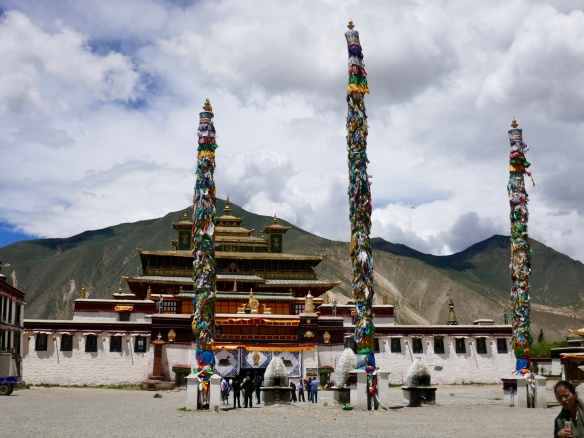 Samye Monastery was destroyed during the Cultural Revolution, but has been restored to its former glory. The main temple is the only surviving structure. Reconstruction however incorporated the three different styles of Buddhist symbolism: Tibetan, Indian, Chinese. The monetary complex is dedicated to the Indian teachers, Padmasambhava and Santarakshita, whose stupas are located on a nearby mountain. 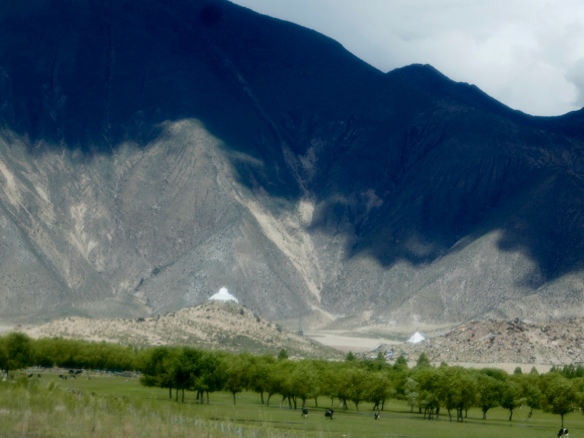 Padmasambhava and Santarakshita, whose stupas are located on a nearby mountain. 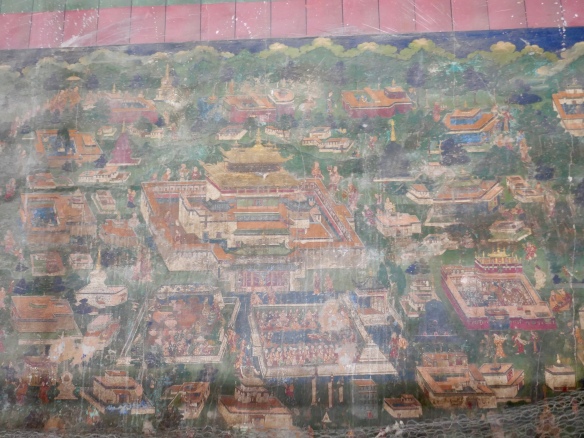 Close to the Samye Monastery are the Chimpu hermitage mountain and San-ngag Zimchen Nunnery. Centred around the cave where Indian Buddhist teachers, Guru Rinpoche (8th century) meditated and taught his disciples.  This mountains is one of the few remaining hermitage centres in Tibet where monks and nuns seclude themselves in years of solitary meditation. 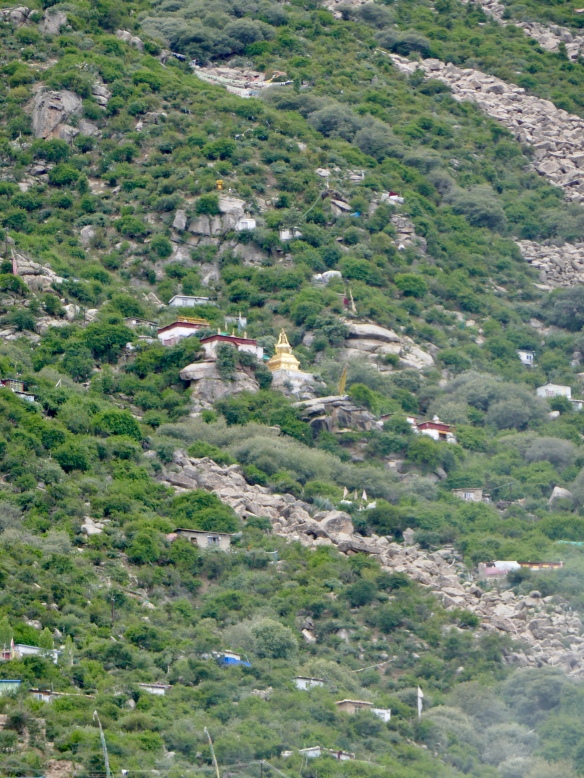 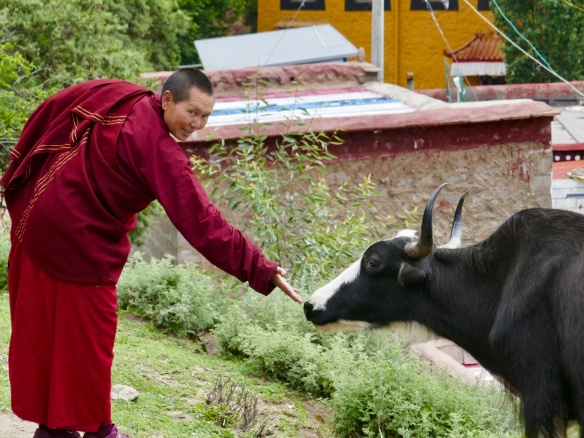 The Tradruk Temple on this rainy morning exudes a feeling of tranquility  even though the history of its construction is gruesome as it is said to be built over a seven headed ogress-dragon. 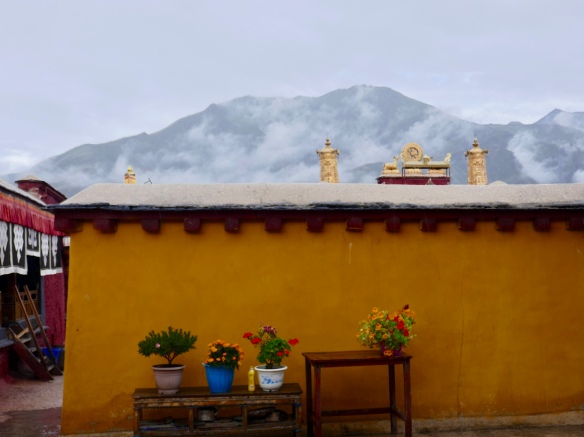 About 5 kilometers from Tsetang, Yumbulagang Palace is located high on a mountain edge, looking down into the valley one can see a marker in the field that denotes the spot that the monkey turned into a human: 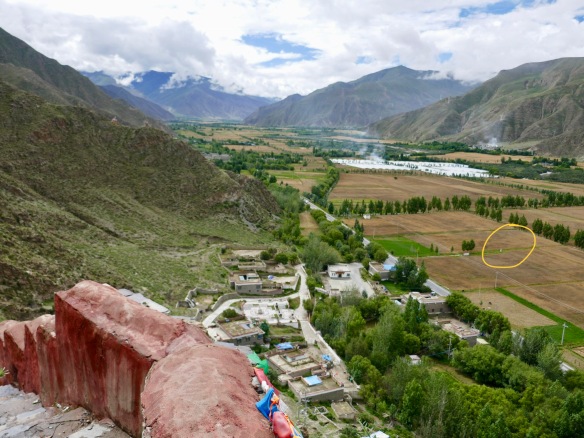 Yumbulagang Palace served at the first Tibetan palace for Nvatri Tsanpo who descended from the heavens by a ladder and the people built this palace for him. It was destroyed during the Cultural Revolution but reconstructed to its original beauty. 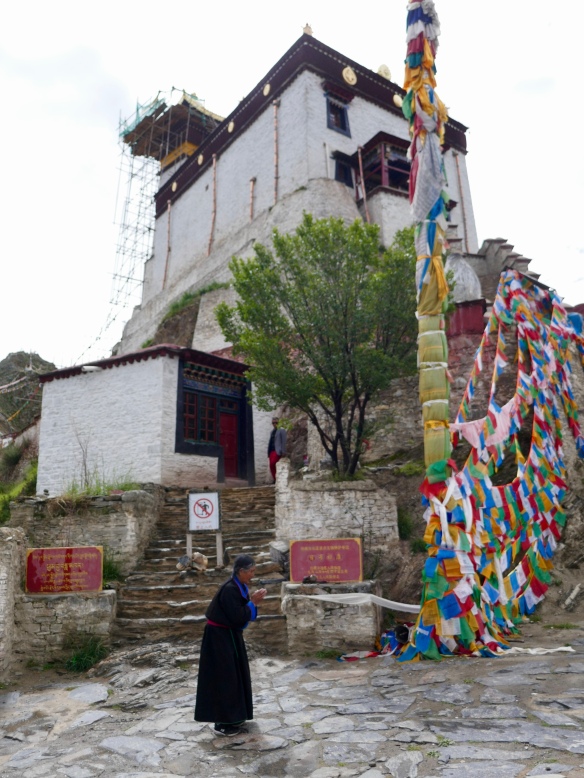 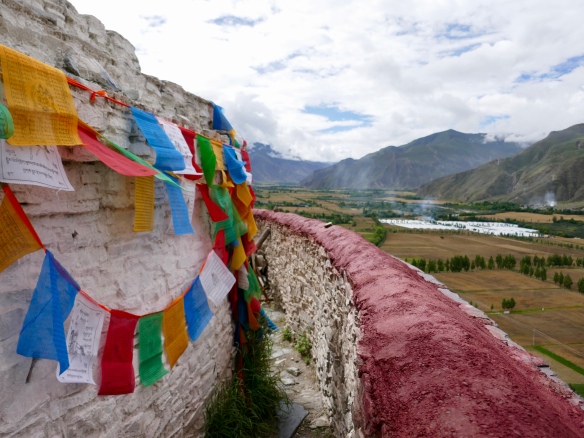 Last year, my visit to Tibet centred around the sights of Lhasa and the  Shotun Festival or Yogurt Banquet Festival. Read about it here. This year as last year, I walked shoulder to shoulder with thousands of Tibetan Buddhist pilgrims who chant mantras, thumb prayer beads and spin prayer wheels for the blessing to witness a huge Thangka displayed on the hillside near Drepung Monastery. 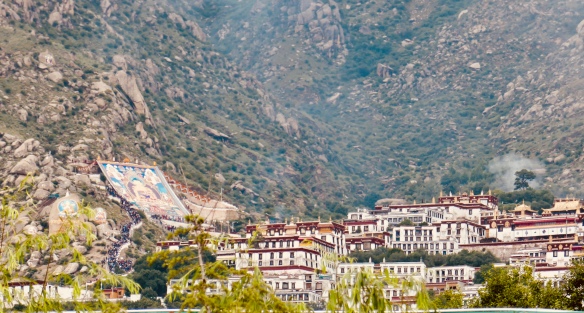 After leaving the city of Lhasa,  we drive southeast along the Kyi Chu River, a tributary of the Yarlung Tsangpo River (Tibet name for Brahmaputra). We are headed for the city of Gyantse, 280 kilometres from Lhasa. Before arriving, we will have crossed 3 mountain passes. The first, Kambala Pass at 4700 meters, the vibrant turquoise lake, Yamdrok, comes into view. However the Notion Kangtsang peak of 7191 meters is shrouded in clouds on this very rainy day. Descending from the Kambala Pass, we stop at a small town, the road follows alongside Yamdrok Lake to the small town of Nakartse, for lunch in a lightless local eatery with a picture of Mao  staring down over our table, but it didn’t stop us from slurping up a superb yak noodle soup with ground nuts. 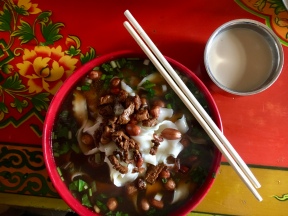 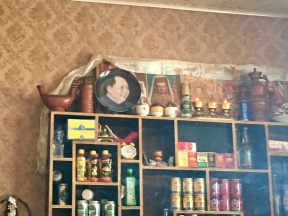 Villagers along the highway take advantage of the onslaught of Chinese tourists during the summer months. Take a picture with a well-groomed goat or yak or sit next to a giant Tibetan Mastiff for a fee, of course, by why not? There are tourist traps all over the world and why not on the roof of the world? So we stop and enjoy a Tibetan tourist trap:

Driving onto the second and highest pass at Kharola Pass, elevation 5600 meters lies under the glacier of over 7000 metres high. Continuing on to the last pass, Semingla Pass at 4800 meters where prayer flags flutter high over the emerald green, man-made lake.

From here it is all down hill and we enter Gyantse town just in time to get permits to visit Pelkhor Chode Monastery the next day. The town is located on the ancient trade routes and the Gyantse Dzong fortress constructed in 1390 guards any approach. (Its walls were the site of a four months siege by the British Invasion in 1904.) 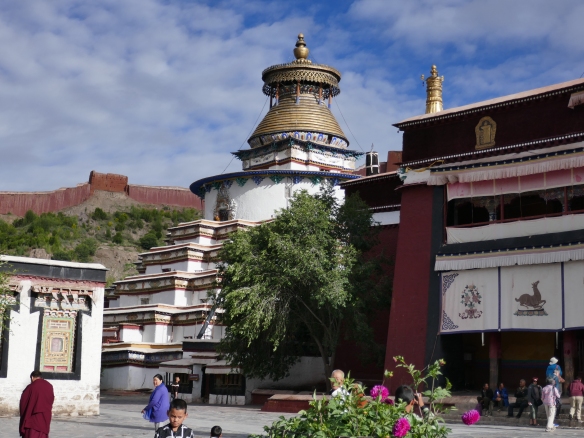 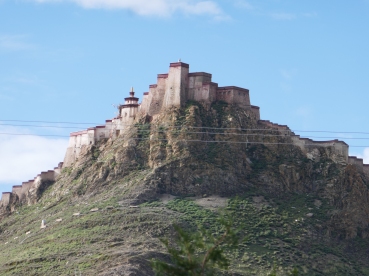 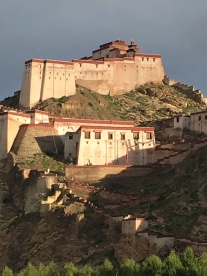 The Pelkhor Chode Monastery was founded in the 15th century with three Buddhist sects, two of which were Gelugpa and Sakyapa, living compatibly within the complex. Today, only the Gelugpa sect remains at the monastery. The Kumbum Stupa meaning ‘place of a 1000 images’ is one of the largest and highest, 35 metres, found in Tibet.

Driving on to Shigatse passes through fertile plains of barley and rapeseed fields are near harvest time. We stop at a local farmers house to talk about his success in greenhouse farming. Their warm hospitality lays out masala tea and barley kernels that taste like dried popcorn. 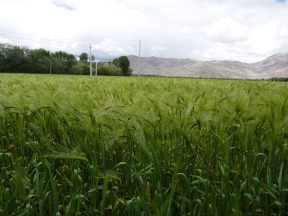 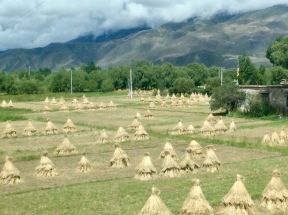 We have seen nothing but rain since leaving Lhasa so the landscape views have been veiled by low hanging dark clouds. As we arrive in Shigatse and before heading to visit the Tashilhunpo Monastery, we decided to stop at a local bakery and try some egg bread. 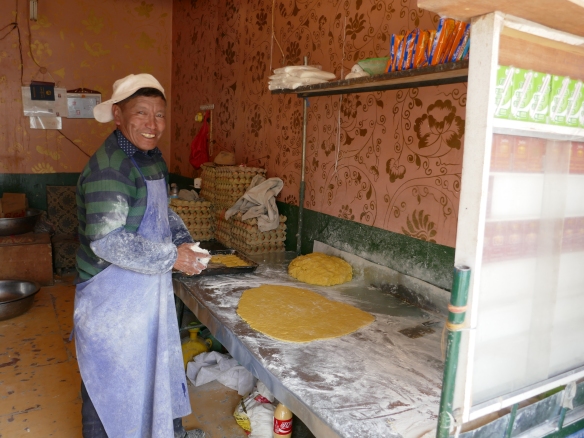 Shigatse or Xikazi, the Tibetan spelling,  is an ancient city and means ‘a manor for the most fertile soil.’ The main attraction is Tashilhunpo Monastery which is the seat of the Panchen Lama, the second most important spiritual leader of Tibet. The monastery was founded by  the first Dalai Lama, Genshuzhuba, in 1477 at the foot of Nima Mountain, which laid the foundation for a development of the settlement, Shigatse. The monastery contains the tombs of the Panchen Lamas, most notably the 10th Panchen Lama whose 1989 stupa used 547kilograms of gold. Tashilhumpo’s best known monument is it 80 foot statue of the seated Maitrya Buddha, regarded as the future Buddha of the world.

The next day we begin the last leg of my journey in Tibet, a 7 hour drive back to Lhasa. We stopped in at the home of an incense-maker who supplies all the many stores around the country with incense for the daily consumption that is needed for offerings. While we were there, the owner was bundling cartons of incense sticks for people to offer at the monastery. 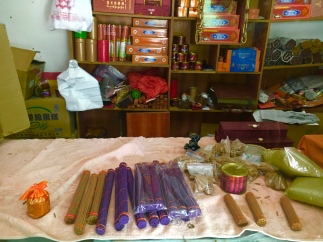 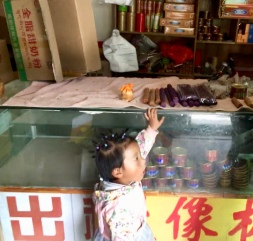 I asked the owner how he makes the incense, and through Tenzin, my translator, he explained, that from juniper berries that he gathers from the mountains, he makes a paste and adds Tibetan medicine and sandalwood. Then he puts the paste in a hollowed out yaks horn and squeezes out sticks that are left to dry.

An hour out of Lhasa, our car pulls into the obligatory police security line and out of nowhere a car rams into us. On my last day and visions of being taken to a nearby hospital was not in the itinerary! But fortunately for us, the car was all that was damaged though an ambulance was called for a passenger in the other car. 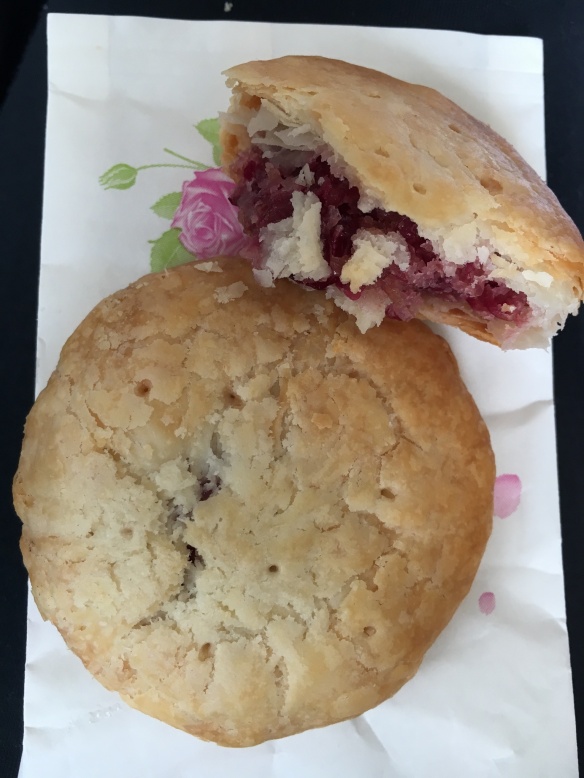