The little we know about Habib Sakakini’s life has been well-documented beginning with historian, Samir Raafat, who tells us that Sakakini arrived at Port Said from Damascus at the tender age of sixteen. Raafat explains that an ingenious Sakakini imported starving cats by way of camels to terminate the rat population during the building of the Suez Canal. This act captured the attention of the Egyptian ruler, Ismail Pasha (r.1863-1879), and prompted the promotion of Sakakini to assist Italian architect, Pietro Avoscani. The Opera House (1869-1971), the first in the Middle East and Africa, had to be completed by the opening of the Suez Canal (1869) so the unheard of decision was made – to work day and night.  Fortune smiled on Sakakini and due to the success, he was awarded contracts and land that lead to his great wealth. The remnants of his legacy are Sakakini Palace, the Greek Catholic Church in Fagella, and the Greek Catholic cemetery in Old Cairo.

There is, of course, much more to the Sakakini tale. It is a story of immigration, religious minority, and economics. Syria and Egypt were considered Arab provinces under the Ottoman Sultan until late-nineteenth century. Travelers during this era did not pass borders but moved about freely, merchants in particular, in pursuit of better trade routes. According to the genealogy of the Sakakini family, the name appears in Mesopotamia in the third century and again in Damascus in the fifteen century. The name, Sakakini, is a derivative of the Arabic word, sekkina, meaning knife, which offers us an explanation of the family business – knife or sword maker, or possibly arms or weaponry dealer. (The origin of family names was most often derived from the family businesses such as haddad meaning blacksmith; naggar meaning carpenter; gamal meaning the one who has camels.)

Genealogy records of the Sakakini family documents the arrival of a Michel Sakakini (1669-1766) in the eighteen century as well as his son, George (1737-1798). They were Melkite Greek Catholic, which recognizes the authority of the Pope in Rome. In this Ottoman age, the Sakakinis probably spoke Greek, Arabic, and Turkish and their travel between Syria and Egypt closely followed the economic and political changes that spread throughout the Ottoman Empire. The Greek Catholic community was a minority that relied on loyalty and networking within their own community to pursue economic activities. Moreover, their association with Europeans through commercial activities and connection with local leaders sustained many a success story.

It is not clear whether or not Habib Sakakini was a direct descendant of the earlier Sakakini clan, but what we do know is that when Habib Sakakini made his fortune and acquired land, he did not forget his religious community. Due to his generosity and service to the Greek Catholic community, the Pope in Rome recognized him with the papal title of ‘Count’. After Habib’s death in 1923, his only son, Henri, (Henri had 3 sons and 3 daughters, Henrietta being one of the children) inherited a great fortune, but alas, neither is remembered for service to their community, only the great mansion remains, gifted to the Egyptian people and shrouded in popular mythology.  The rumors – fact or fiction – passed down through generations will be lost but the epitaph of Sakakini Palace must not mean an end to a legacy. The writing might be on the proverbial wall but we have the opportunity to preserve this fascination with the charismatic mystery of Gabriel Habib Sakakini Pasha and his palace.

Sakakini’s Palace, built in 1897, sits in the middle of Ibn Khaldoun midan (square) approached by eight streets.  The palace grounds are round, filling the center of the midan.  The palace itself is square, and a tall turret with cupola and spire extends from each corner.  A hexagonal structure, topped by a parapet and large cupola and spire sits atop the center of the palace, above the second floor.  The two main floors of the palace are longer on the south side, going out beyond the turreted corners. It is not completely clear whether this southern extension was part of the original plan or added later; the extension does not seem to fit architecturally, but its architectural decoration matches other parts of the house. A 1924 photograph of the palace does not seem to show the wall of the extension beyond the turret on the west side.  The photograph also shows that the turrets had open arches, like balconies, and there were not spires, but tall slender statues at the very top.  The photograph also shows that the palace walls were striped, like ablaq decoration, and not all gray like they are today. 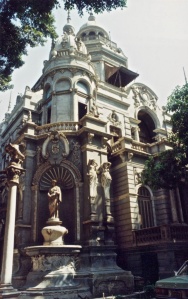 The story is told that Habib Sakakini saw a palace in France that he admired, and hired Italian architects to create a replica of it.  Whatever the inspiration, Sakakini’s palace is in the Rococo style of the late eighteenth century. Some scholars prefer to call the architecture of this period Late or High Baroque.  Janson’s classic History of Art describes this architectural style as “luxurious vulgarity” and “conspicuous display”, reflecting the taste of the “newly rich and powerful”.

The word Rococo comes from the French rocaille, which refers to “shell” or “pebble” work, and Rococo architecture is characterized by stucco decoration that is frothy and voluptuous, filled with motifs of shells, foliage and marine life.  The high point of this type of decoration was produced in southern Germany in the latter half of the 1700’s, and parallels can be found between decorative details on Sakakini’s Palace and the great German palaces of Nymphenburg, Bruehl, and Sanssouci. 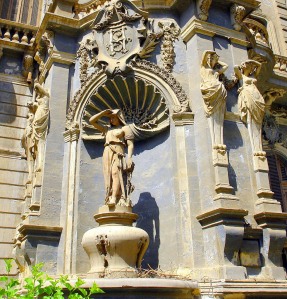 Decoration is most lavish on the lower halves of the turrets, below the windows, and is done in both statuary and carved stucco.  Each turret bottom has an arched niche with shell motif. Above the middle of the niche is a large cartouche, not in pharaonic style, but a decorative frame in the form of a curled piece of parchment, with the entwined letters H and S.  A female statue stands in each niche on an urn with lion-headed spouts, which in turn rests on a wide round base decorated with a band of various creatures, including mermaids, cherubs, swans, peacocks and fish.  Each woman is slightly differently draped (perhaps undraped is more accurate) and holds either fruit, or, in the case of the statue in the southeastern niche, sheaves of grain. The sides of each niche are flanked by pairs of terms, or termini, pilasters which as they go up turn into female figures holding a garland, or swag.  On the balustrade above each pair of terms is a rectangular plinth with a statue group of three figures. The copula on the top of the turret has stucco decoration of seraphim, garlands, and eagles, as well as urns, which continue along the edge of the second story roof. 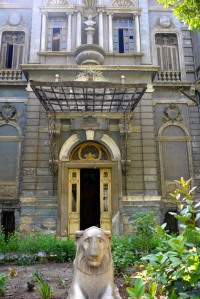 The front door of the palace is on the west side, and a second door with an approach for carriages is on the north side.  It is said that Sakakini refused to ride in automobiles, and always rode in a carriage.  Inside this door are both a staircase, and an elevator, to each of the floors.  Above the large keystone of the doorway arch is an inscription which reads “Habib Sakakini, 1897”.  On the façade of the second floor up above, directly over the doorway, is a carved portrait bust of Sakakini wearing a fez and medals on his chest. It stands in an arched niche with shell motif, flanked by windows with similar arch decoration. 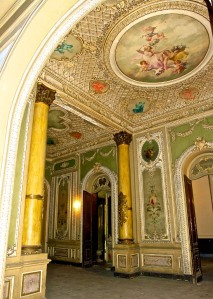 The main floor of the palace has large, open salons, one of which was perhaps meant as a ballroom.  These rooms are painted in pale colors: light green and white, with gilt decoration, as well as mirrors.  The ceilings are a mixture of gilt decoration and fresco. The subject of the paintings is typically Rococo, such as figures from mythology, especially nude females, and cherubs, floating on clouds in pale skies.  Other rooms on this floor are the dining room, connected to the kitchen below by a dumbwaiter, a library and an office or study. 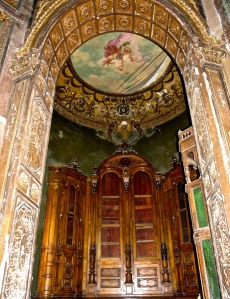 The bedrooms are on the second floor. A large salon is in the middle, with the bedrooms opening off of it. The only one we were allowed to see was the master bedroom, on the west side, with a balcony right above the main door. It was not possible to go up on top of the palace to the room and cupola on the roof; we were told it was not safe because the floors were rotten. We visited the palace numerous times over the last eight years and found the same windows and doors permanently open on the upper floors exposing the delicate interior to the elements. One wonders how this heritage monument will survive such neglect.

The memory of Gabrial Habib Sakakini Pasha (1841-1923) still lingers in footnotes of books and in intermittent articles for those of us that cannot quite let Sakakini Palace fade into oblivion. If it were not for the shell of this grand mansion languishing in neglect at a centerpiece in the district of Daher, a middle-class suburb in Fagella, the memory of Sakakini might be rubbed from today’s historical treasures.  In actuality, the palace is a tawdry reminder of Habib Sakakini’s nouveau riche interpretation of luxury, which is exactly what peaks our imagination and our desire to know more about the man and save his legacy.

Ceiling skirting in library depicting a bust of Sakakini with cherubs

Read more about Cairo’s grand houses, mosques, churches, and all the museums in Cairo The Family Guide click here, by Lesley Lababidi in collaboration with Lisa Sabbahy, American University in Cairo Press, 2010.