Continued from: Nigeria to Togo

The road to Seme, the Nigeria and Benin frontier, is reputed to be a difficult, time-consuming crossing, but to our pleasant surprise, it is not. Between the large puddles of water and mud, wooden planks were laid down to assist movement from one immigration container and vaccination kiosk to the next. The group moves through with relative ease.

We meet our Béninoise tour guide, Martine de Souza, on the Benin border. Immediately, her negotiation skills are put to use when the bus that collected our group proves unsatisfactory. While the group waits at the Hotel du Lac in Cotonou, a welcome respite, a new bus replaces the old, broken-down bus.

The words, equatorial Africa, often evoke images of coconut palms swaying high above thatched-roofed villages that line white sandy beaches. As the bus detours away from the main highway, we find ourselves on a bumpy, sandy piste that take us along the picture-postcard shores validating this equatorial image. We are heading eastward to the city of Ouidah.

Several hours later the monumental arch of the Door of No Return, built in 1970, comes into view. This monument was erected in the memory of thousands of slaves who were marched from the interior to slave ships. From Ouidah to the beach is the Route des Esclaves, a 3.5km sandy road leading to the Door of No Return. At the sides of the monumental arch are two statues called the Revenants. They represent Voodoo dancers who wait on the beach to welcome wandering slave souls back to Africa.

(run cursor over pictures for caption) 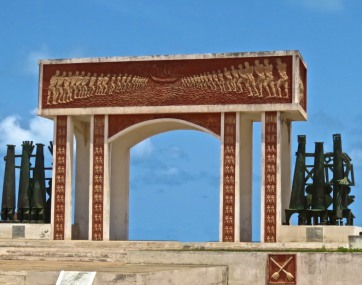 Door of No Return, Ouidah, Benin

the Revenants at the Door of No Return

Martine de Souza at Door of No Return

The book, The Viceroy of Ouidah by Bruce Chatwin, retells the life of Francisco Felix de Souza, a story of violence, greed, jealousy, disease, rituals, and slave trade set in 19th century Dahomey (Benin). We are fortunate to have as our guide, Martine de Souza, 7th generation, direct descendent of the family founder, Francisco Felix de Souza. Her relative was a Brazilian who came to Dahomey (Benin) in 1812 and along with the King of Dahomey developed a lucrative slave trade business with Brazil. Martine points out a nearby center, Place du Repentance, built by the Ouidah community for Africans to pray for forgiveness for their part in the slave trade.

It is nearly 4pm and in the heat of the day, we reach the Benin-Togo frontier. We pile out of the bus and walk from one border to the next. The procedures seem more lengthy and drawn out than the early morning crossing from Nigeria. On completing passport formalities, we find the bus locked and the driver gone. We languish under umbrellas meant to shade the market sellers. Finally the driver returns, we are on the road again. Our journey takes us to scenic Lake Togo and the Hotel Le Lac for a late lunch. Here, we were to take a pirogue across the lake to Togoville but as the sun is setting, plans change. A visit to Togoville will have to wait until the next trip.

It was 7pm Nigerian time when we entered Lomé, Togo. Our driver did not know the way to the hotel so Martine jumped aboard a local motorcycle-taxi. Off she went into the night, her blue wax-print scarf flapping in the breeze. The bus followed. We happily disembark at our hotel, vie for rooms, shower and prepare to partake in a delightful dinner on verandah of Hotel Equateur.

Togo is a narrow slice of land only 51 kilometers wide and extends 587 kilometers. Togoland, in 1884, became a German protectorate. After World War I, the European powers took Togo away from Germany and rule was transferred to France. In 1960, Togo became independent of France.

Quite a remarkable country, Togo is almost pristine and untouched by refuse and extreme poverty. Driving through the streets of Lomé, I had a strong sense of déjà vu. The town had changed little since the Togo’s mid-1970 heydays,  when my husband and I drove from Accra, Ghana, once a month to buy groceries. Lomé was renowned for its French bistros and diverse cuisine in those days. Though Lomé’s population is about 800,000 residents, restaurants, cafés and bars are found on every street. Lomé is a slow-paced city that has retained its wondrous sweetness.

Rising early on Good Friday morning, our breakfast is a feast of fresh pineapple, mango, papaya, and melt-in-your-mouth baguette, croissant and pain aux raisins with homemade jams. We begin our day with a trip to the Musée National du Togo founded in 1950. Historian, Hubert Kponton donated a major collection to the museum in 1974. For shoppers, the morning hours were whiled away at the local souvenir market and sidewalk café. Our lunch was at an open-air restaurant, Côté Jardin. The thatch-covered terrace provided

protection from the afternoon rain as we indulge in an excellent three-course meal.

Late in the afternoon, we embark on a 2-hour bus ride into the Plateau Region of Togo situated near the Ghanaian border. We stay in the town of Kpalimé at a government rest-house, Grand Hotel du 30 Aout. Here, we would spend the next two days hiking through mountain villages. Our itinerary includes climbing Mt. Agou (986m), Mt. Kloto (741m) with views of Lake Volta and trails that lead to Cascade de Avoue.

(run cursor over pictures for caption)

Missionaries arrived in mid-1880s in area of Kpalimé

A winding mountain road that the Germans built 120 years ago takes us to the waterfalls. We are here at the end of the dry season so the water flow is meager. After a few months of rain, the waterfall will surely be impressive. The mountains are laden with cocoa, mango, orange, and African apple trees. We pick fallen avocado pears from the path and eat gratefully as we trek along the trails. Fruits, vegetables, and medicinal plants grow abundantly up and down the mountain side, their roots spread deeply into the dark, rich soil.

On Easter Sunday, we find ourselves along a mountain path that leads to the village of Kpeta meaning ‘on top of a hill.’ Houses are made from rock, brick and wood suggestive of a Swiss village built on steep, winding paths. The town is preparing for their annual festival called Festival Doulayon meaning the ‘town will look good.’ On the flower-lined trail, we meet the town-crier. He beats his gong and cries, “meet under the tree, don’t be late!” The town band assembles and plays the Togo National Anthem. A group of Boy Scouts raise the Togo flag to the top of the flagpole.

Attending a function in West Africa is always a colorful affair. Whether a wedding or ceremony, there is a custom to provide cloth of the same color and pattern to all participants. Wearers of the same cloth demonstrate their solidarity with and identity to members of a clan or family. All members, men and women, are free to tailor the material to suit their personal style, but everyone wears the same cloth. Today, the festival goers wear bright blue and green wax print. 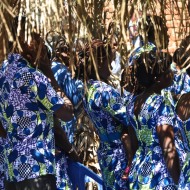 The village elders welcome us and Martine, who speaks several local languages, responds. Entertainment begins with singing and drumming. Children sing, “white person, white person, good afternoon, how are you, thank you.” Martine later explains to us that the community had saved money to improve the village and on this day, the town celebrates their accomplishments. 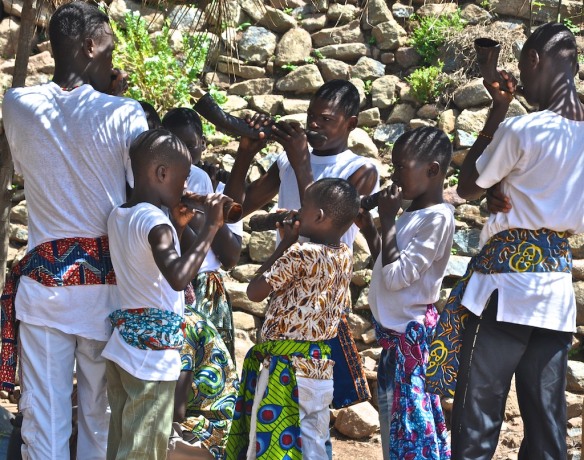 Easter Monday and we begin our preparation to return to Lagos. Along the road from Lomé to the Togo border, the West African Celestial Church of Christ (founded in Nigeria in the 1920s)members parade through villages. Clad in white robes, the Celestians are members of a church that is apocalyptic with Christian beliefs. They carry staffs of the cross and march with drums, singing and praising.

We return to Nigeria the same route by which we came. Grateful to Ayo and Sunny for organizing this trip; tired but happy with our adventure; the frontiers, the shores, and the people blur as we near our beloved homeland, Lagos.

******All Photographs and text are under international copyright laws. No re-use without the permission of Lesley Lababidi 2019.

16 thoughts on “Nigeria to Togo: A West African Road Trip”