The plan was on September 1st to leave Turpan by train for Kashgar on a 16-hour overnight sleeper, then to spend 3 days in Kashgar and then drive over the Torugart Pass (3,750 meters) into Kyrgyzstan on 4th of September. Twenty minutes before boarding the train, the news arrived that the Chinese had closed their border with Kyrgyzstan for the next 5 days because of Eid el Kabir. Do I continue onward to Kashgar and hope for the best; hope the border will open one day before my visa expires?  Do I wait in Kashgar but risk being delinquent in exiting China? I was told that there would be a fine incurred if I stayed past my visa date. Having experience in these matters in Africa, I knew, this breach could incur quite unpleasant circumstances to over stay one’s visa deadline. Another concern was that since arriving into Xinjiang Province, the security had noticeably tightened. The Chinese government, worried about problems in this predominant Muslim region, put tight security precautions in place. I knew from experience that one can not expect latitude in these situations, anything out of the ordinary would be questioned. Running through my mind was: do I take the long train ride to Kashgar, spend 24 hours and catch a plane to Urumchi (the capital of Xinjiang Province and closest international airport) and then fly to Beshkik, Kyrgyzstan involving long lay-overs in two airports? Or could the driver and guide who just dropped me at the train station and was heading themselves to Urumchi, return and take me with them on the 2 1/2 hour drive? A quick decision had to be made. I decided rather than to climb the ‘wall’ , the best way -though it meant giving up my goal of traveling completely across China, not seeing Kashgar, and forfeiting a fascinating part of the trip – going around the ‘wall’ was the best decision. So I exited from Turpan railway station. And found myself, several hours later, in Urumchi the capital of Xinjaing Province and on a Southern China Airway’s flight, the next day, to Bishkek, Kyrgyzstan.

So back to Turpan…
It is a city in Xinjiang Provence, an oasis 260 feet below sea level; a city of extremes – harshly hot in the summer and caustically cold in the winters. Yet it is an agricultural city that produces a variety of the finest raisins in China (possibly the world) with 22 percent of sugar.  The grapes are dried in drying house usually on the roofs of houses and hung from the ceiling to be dried by the hot, arid wind. 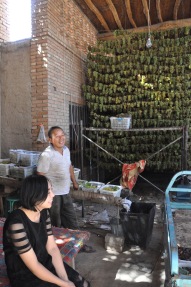 Fruits, vegetables and cotton (water-needy) are also abundant crops. Yet the city is surrounded by bare, flaming hot mountains where eggs are cooked in the sand.

How is this possible? The discovery was truly amazing…the land is irrigated by an underground canal system known as the Karez System. The Karez is made up of vertical wells, under ground canals, above the ground canals and small reservoirs. A 2000 year underground , man-made irrigation system that captures the melting snow from the high Tien Shan (peaks reach above 5000 metres)  and through underground dug out parallel system of water way-like pipes, the water flows to the lowest part in the oasis. This along with the type of soil gives life to the area that has enticed people to stay, farm, and trade.

Turpan is in Xinjiang Uyghur Autonomous Region, a Chinese administrative division that contains up to 37 different ethnic groups including the Uyghur, Kazakhs, Tajiks, Hui, Kyrgyz, Mongols, Han and Russians. This region has the most diversity of ethnic groups than any other region in China. Ancient references call this area the Chinese Turkestan. The people, before Islam, followed Buddhism, the remnants of the religion can still be seen at Bezeklik’s Thousand Buddha Caves, which are an example of portraits of Buddhist religious art. There are 77 caves at the site with the story of Buddha’s life. The faces painted on the walls are as diverse as the ethnic population that one sees on the streets today and as vivid.

Yar City also known as the city of Jiaohe is nearly 2000 years old. It was an important trading post on the Silk Road. It is an independent islet formed by crossing of two river valleys.

The ancient city was built on a plateau that contained government buildings, Buddhist temples, and private dwellings. An ingenious construction technique was employed by digging downward creating room-like basements and the dug-up soil was used to construct structures on ground level. The city islet (1650 meters in length, 300 meters wide at its widest point) in the middle of a two rivers formed a natural defense, which would explain why the city lacked any sort of walls. Instead, steep cliffs more than 30 metres high on all sides of the river acted as natural walls. The layout of the city had eastern and western residential districts, while the northern district was reserved for Buddhist sites of temples. In the 13th century the area was overrun by Genghis Khan’s army and destroyed although my guide’s story was that the city was destroyed by the introduction of Islam, which divided people’s loyalties and eventually destroying the Buddhist city. 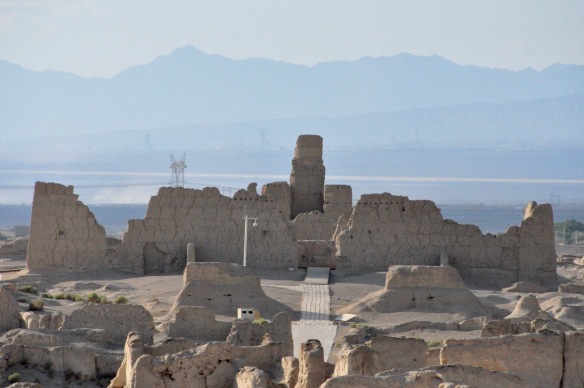 The Emin Minaret was named after a local Turpan general, Emin Khoja. During the Qing Empire, the general sided with the Qing Empire against the Dzungar Mongols and defeated them. The minaret was completed in 1778 during the reign of the Qianlong Emperor (r. 1735–1796). It was built to honor the exploits of the Turpan general, Emin Khoja. Local craftsmen  constructed the first of its kind minaret  in China using local materials. It is an elegant, circular, tapered Islamic dome, 44 meters high, one of the tallest minarets in China. 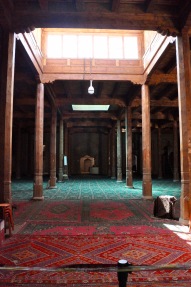 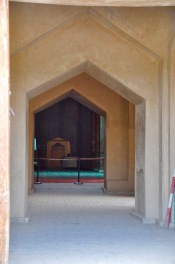 The highlight of the Turpan was visiting a women’s workshop/business named BAGRIM, meaning My Heart. Founded by Hawahan Tursun three years ago, she decided that women in the village should continue the Uyghur embroidery craft as well as to make extra money, she opened a workshop to teach and promote handmade Uyghur textiles. Soon, her daughter, Rahile Hoji, joined her mother to help with marketing. Even her grandmother, Hawahan Osman, embroiders Uyghur hats. It takes her 4 days to make one hat. If there is interest in supporting this project by purchasing their products, please email Rahile at 174134013@qq.com or 1352847686@qq.com .

Seventy-five year old Hawahan Osman says that the years of her youth were years of starvation.  But today there is plenty of food even too much of everything! She says life in China is good and plentiful. 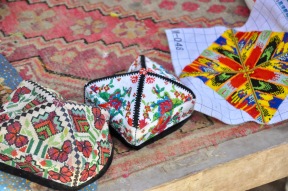 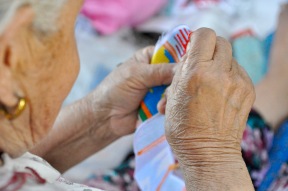 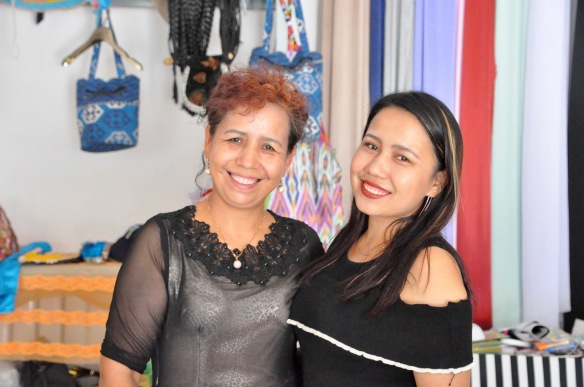 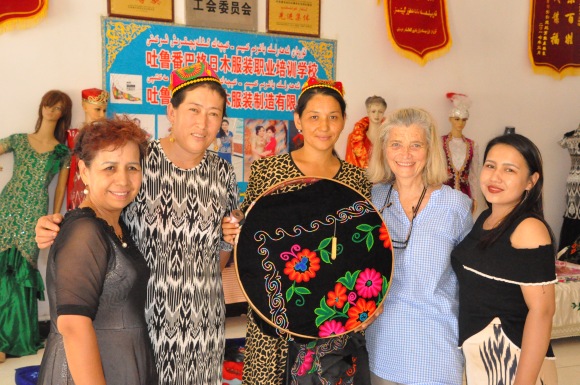 Returning to the hotel in the hot afternoon, we came upon the first bread open oven (similar to that of Syria and Egypt) in this trip. A village women was bent over the wood burning brick oven making bread loaves called naan. She waved for us to stop and generously gave us a loaf of bread to share. Hot from the oven, the bread was delightfully chewy with a slightly crunchy, salt and black sesame seeds added to the tastiness.

The last evening dinner in Turpan was enjoyably spent at the home of a Uyghur family. Sitting on the typical raised table in the centre of grape vineyard, the family prepared a scrumptious typical Uyghur meal of a rice dish, noodle soup, chive dumplings, fried-twisted crispy dough with the ever present and ever-replenished  bowl of tea. A meal to remember in Turpan. 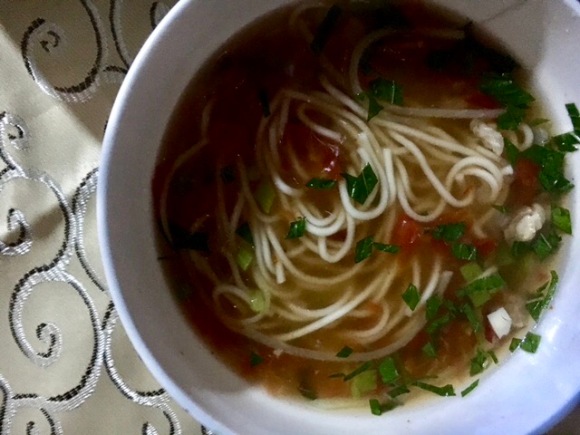 The following photos are the guides that insured that my trip was a safe, comfortable, nourishing, knowledgable, and successful 7500 kilometres through China. Each one gave me a piece of their Silk Road to carry with me and savour over the years. I am eternally grateful. Although guiding and driving is their job, they all took pride in showing me their country and I will carry the admirable impressions of China to others along my journey because of their outstanding efforts. 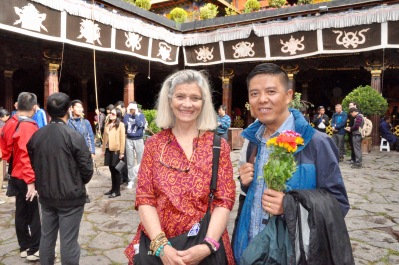 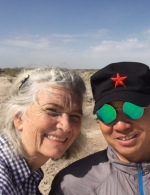 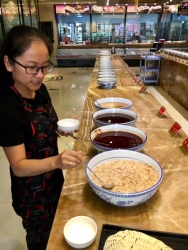 The Silk Road was about migration and transfer of ideas, ideologies, religions, intermarriage, language and trade. It was about invention, movement, and discovery. Walnuts, glass, pomegranates, horses, lions, camel, coloured-glazes (cloisonné), herbs, musical instruments, chairs are just a few of the things introduced to the East. While the East carried porcelain, silk, iron ware, gunpowder, tea, paper, bitter orange to the West. Curious and desirous seeking people took up the journey for profit and power, and survival. There was suffering and hardship; life lived and life lost. The Silk Road then and now, remains the same.

With the Eastern roads behind, I head West into Central Asia.

(all rights reserved, copyright 2017 To copy or re-produce photography and/or writings, written permission from Lesley Lababidi is required)

Detour! Diverting away from the mission of this blog, I post on my journey to an unfamiliar territory: East Africa – Tanzania!  There is little that I can add to the multitudes of books, films and photographs that fill centuries with stories…quintessential Africa, the Serengeti, Mount Kilimanjaro, nomadic Maasai, Swahili, Zanzibar…the vast landscapes, the birds, reptiles and animals.

I am a humble novice.

From Lagos, I meet the Egyptian ARCE group in Addis Ababa and from there we begin our journey of shared newness. There is something special about sharing brand new experiences; each person has their own unique reaction to unguarded moments. We each find our own horizon.  I experience, profoundly, the integral connection among all living things. “It is here in the labyrinths of never ending plains that extremes converge—open expanses, horizon, and desolation.”- Ibrahim al-Koni

Gratitude and thanks to Mary Sedek with ARCE, Leonie with Tanzania Adventures. And Aminielle, our driver and expert guide, who could identify the slightest movement and change of color in the bush and his superior bird knowledge.