‘Abbasiyya, the place of Abbas, is a middle class district northeast of Cairo. ‘Abbas Hilmi I (r.1848-1854), nephew of Mohamed Ali Pasha, took over the administration after the Ibrahim Pasha’s death in 1847. He began to devote his attention to building palaces (7), a hospital, military schools and military barracks in a new suburb he called after himself, ‘Abbasiyya. He gave land to members of the royal family for them to build palaces. ‘Abbas extended the road system from Cairo to ‘Abbasiyya to encourage the royal family and ministers to live in the new district. Accounts from travelers at the time stated, “ ‘Abbasiyya claim that ‘Abbas’s palace “set an example for palace beauty and that the royal princes, like ‘Abbas himself, preferred to build in European fashions.” ( Pollard, Nurturing the Nation. p42).

From the city of Fustat in 640 that evolved in 750 to the Abbasid city of Al-Askar; to Ibn Tulun’s al-Qatai in 870 and finally the in 969 the Fatimid city of al-Qahirah—Cairo, each newly-found area stimulated the economy to promote public allegiance to the regime through expansion and by  destruction or neglect of the old system. It seems ‘Abbas Pasha might have decided to follow other rulers of Egypt by looking northward to create a new royal city himself. Unfortunately for ‘Abbas Pasha, he was murdered before his royal ambitions could be attained. Sa’id Pasha, his successor, let the burgeoning quarters fall into neglect.

Eclectic architecture of nineteenth and twentieth century in ‘Abbasiyya:

‘Abbasiyya went under another period of growth under the Khedive Tawfik (r.1879-1892), who built his palace in the quarters. In 1892, the tramway lines operated to the neighborhood and ‘Abbasiyya became a popular residential district for palaces and villas for Egyptian elite, the British, and Egyptian middle class.

We follow the road to the left, leading direct to Abbasiyeh. On the right we pass a modern public fountain, and on the left an old burial-mosque and the ‘European Hospital.’ ‘Abbaisiyeh is a group of houses and cottage, founded by ‘Abbas Pasha in 1849, i order to afford suitable accommodation for the Beduin shekhs whose friendship he was desirous of cultivating, and who objected to enter the city itself. A large palace which formerly stood here has been replace by barracks in the most modern style, besides which there are numerous older barracks and a military school with a gymnastic-ground. The English troops are at present encamped here. Near the last barrack on the left is a palace of the ex-Khedive’s mother, and a little farther on, also to the left, rises the meteorological and astronomical Observatory. At the end of the houses of ‘Abbasiyeh begin the new garden which have been reclaimed from the desert. The road crosses two railways, passes the village of Kubbeh (Qubba), intersects beautiful orchard and vineyards, and leads under handsome acacias and past numerous sakiyehs to the Palace of Khedive Tewfik.  The vineyards, which were planted by Ibrahim Pasha, the grandfather of the Khedive, and contain various kinds of vines from Fontainebleau, are celebrated. This property formerly belonged to the late Mustaf Fazil-Pasha, the uncle of the Khedive.  The present palace , however, has been entirely erected by Tewfik himself. In the desert, is situated the Race Course, where races formerly took place annually in January. 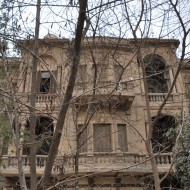 1914 Villa Yousef Pasha Soloman,on Sharia Azim el-Dawla, from Turkish meaning ‘the best in the world’. Architect:Italian Giuseppe Tavareli.This villa looks like it may be demolished. ‘ 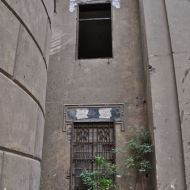 (Hover cursor for information about Villa Yousef Pasha Soloman built in 1914. For more information and to see the interior  read: Egyptian Palace and Villas, 1808-1960 by Shirley Johnston, p130-133.)

‘Abbasiyya was a diverse district of various religious groups and nationalities. Churches, mosques, synagogues and hospitals, schools, cemeteries were developed for specific groups who lived in relative harmony. People from the Levant and Europe settled in ‘Abbasiyya built schools, factories, businesses, and considered Egypt as home. As for the Jewish community ( Read: Lucette Lagnado’s Man in a White Sharkskin Suit and Egypt Today, “Oral History of Egypt’s Jewish Minority.” May 2005.) , they had religious freedom, held government positions and many were part of the elite society.  After the UN approved the Partition Plan in 1947 to create Israel and after the Egyptian 1952 coup d’etat, everything changed.

‘Abbasiyya was founded as a royal district in the middle of the desert by ‘Abbas Helmi I. A satellite settlement that started without roads, water, or  sewage works was certainly one reason for its slow beginnings. After ‘Abbas Pasha’s death,  the transferral of military power to the Qasr el Nil barracks by Sa’id Pasha changed the area of urbanization followed by  Ismail Pasha’s master plan of Ismailiyya in 1869, ‘Abbasiyya district remained stagnant until Khedive Tawfik took power with the British occupation. At the turn of the nineteenth century, palaces and European villas, upper-class apartment houses grew steadily with schools, hospitals, and religious institutions complimenting all groups. Unfortunately little survives of these archaeological gems and what remains will probably not survive much longer. 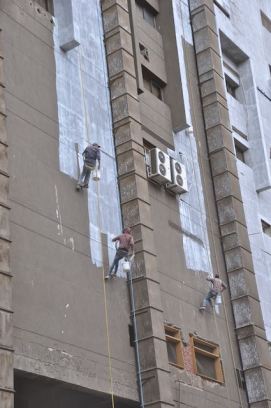 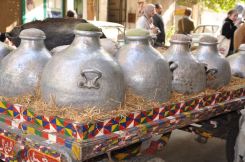 *Thanks to Ahmed el Bindari for organizing the ‘Abbasiyya Walk’.

Heritage vs Urbanization: A Balancing Act