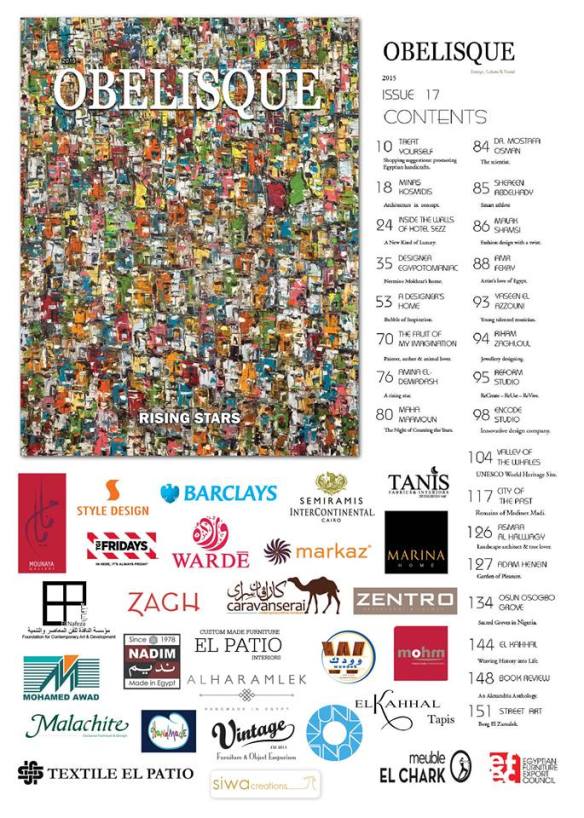 City of the Past – Fayoum, Egypt 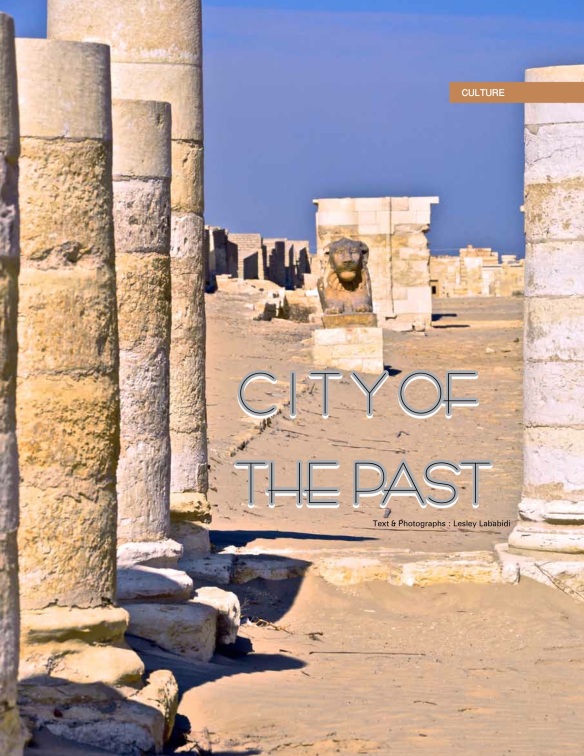 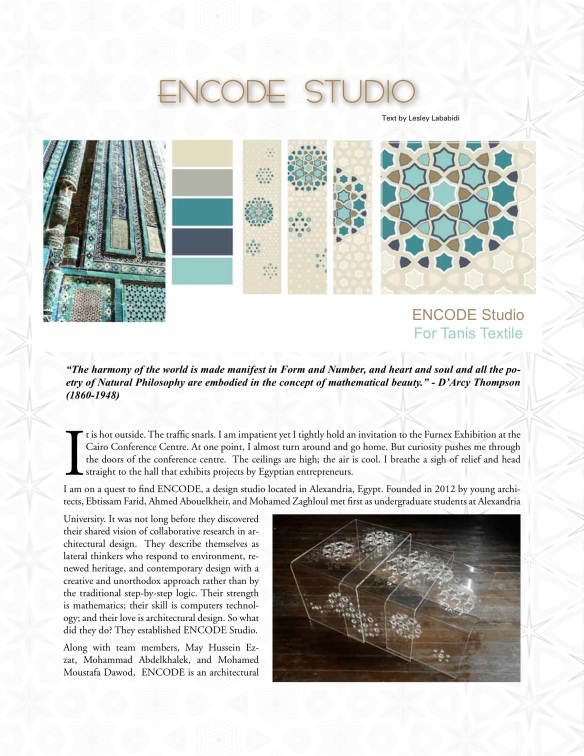 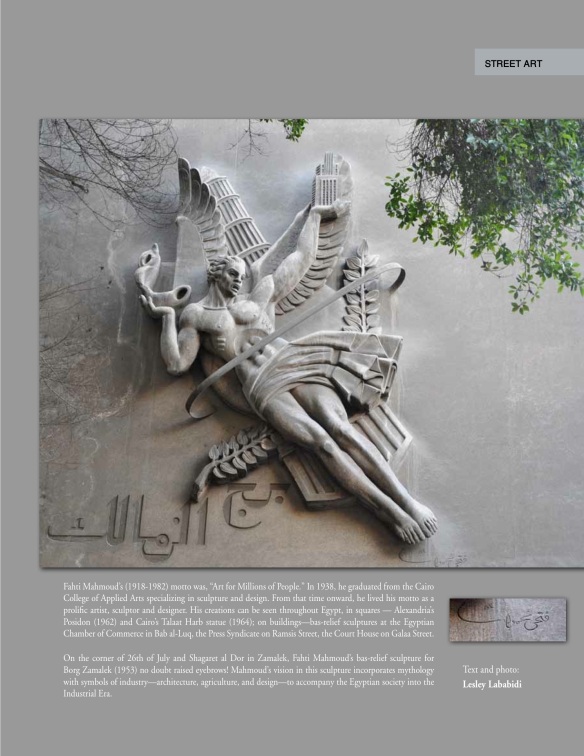 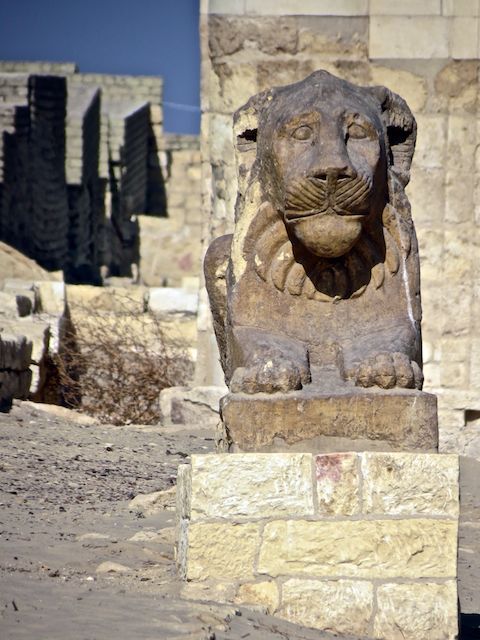 Fayoum is a depression or basin in the desert like the Qattara Depression. However unlike the Qattara, Fayoum is fertile. Well below sea level, Fayoum receives its water from the River Nile. Waters rushes into the depression through a narrow neck of land called Bahr Yussef. Silt, mud, and water provides the Fayoum basin with rich agricultural land.  In fact, the region of Fayoum has evidence of earliest land cultivation in the world.

Fayoum (see Neil Hewison’s book on Fayoum) is host to centuries of archaeological and natural wonders. Only a three hour drive away from Cairo, one can visit the nature park of the Valley of the Whale (Wadi el-Hitan) to archaeological sites that date back to the Middle Kingdom.  In fact, Fayoum is home to “The City of the Past”—Medinet Madi—an ancient town with the only preserved Middle Kingdom temple in Egypt.  Amenemhat III and then his son,  Amenemhat IV, both pharaohs during the 12th Dynasty (about 2000 BCE and 1700 BCE), reigned over this agricultural village named Dja, which was dedicated to Renenutet, the cobra goddess protector of harvest, and Sobek, the crocodile god.  Lapsing into decay for centuries, it was during the Ptolemaic period (312-30BCE), the town revived, called Narmouthis, the Greek version of Renenutet. 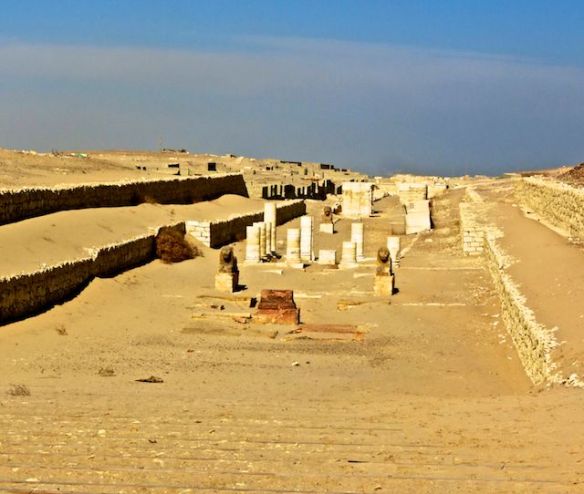 Romans (29BCE-351AD) recognized the strategic location of this ancient city. Built on a hill, the city had a good vantage point of the surrounding lands and Romans enclosed the city as a military fortress. During the Byzantine era, churches were constructed.  Excavation revealed foundations of eight churches. By the time the Arabs arrived, this area had been long abandoned. The winds filling every crevice with sand and hid this ancient city. The Arabs name it “Medinat Madi” and left it to remain the “city of the past.” 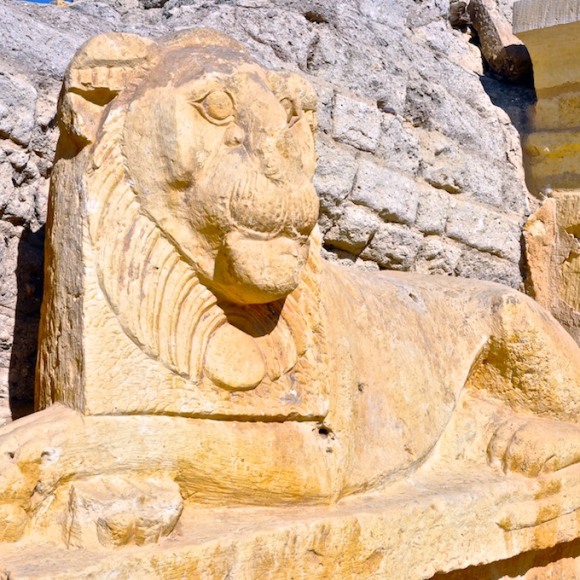 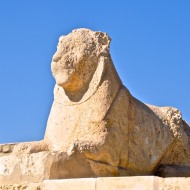 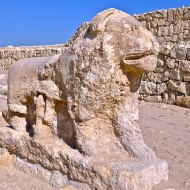 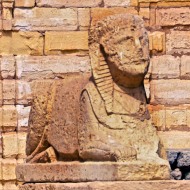 Napolean’s expeditions to this area was the first record in modern times. In 1934, an Italian team of archeologist began to excavate the area with teams working on and off  until 2011, which concluded with comprehensive survey and mapping of the site with a visitor center. 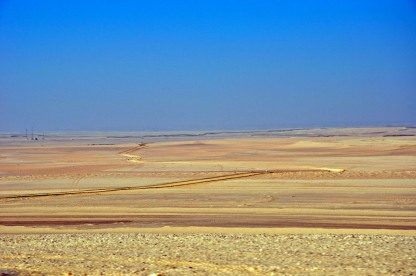 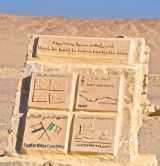 Today, there is 28 kilometers of good gravel road that connects the protected area of Wadi Rayan to the ruins. The well-marked road ascends gradually to the visitor center. The entrance ticket for non-Egyptian visitor is 50LE and a guide escorts the visitor to the site, which is a short walk through a desert path. At the top of the hill, one can see the Ptolemaic constructed a processional avenue or dormos lined with a stone wall on either side with stairways that lead to the priests’ houses. Along the way sphinxes with heads of portraying a Ptolemaic king line the corridor. 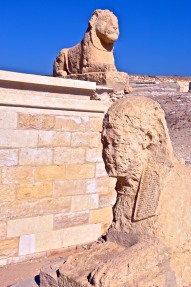 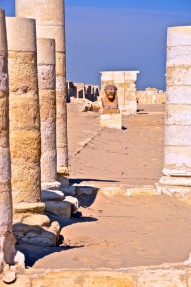 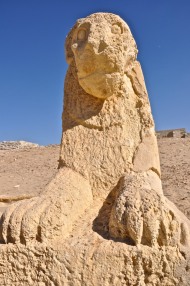 The temple area begins with Heraclides vestibule and a pair of crouching sphinxes on top of a stone wall overlooks the open corridor. Just beyond are two smiling lions on either side. The inner left wall is an engraving of a seated goddess, possible Renenutet. Beyond, is the rare example of Middle Kingdom monumental temple that gives the visitor a sense of a temple during ancient times. The temple is dedicated to Sobek and Renenutet along with their son, a form of Horus. The depictions of Renenutet are rare as are the representation of Amenemhet III and his son, Amenemhet IV making offerings to Sobek and Renenutet. 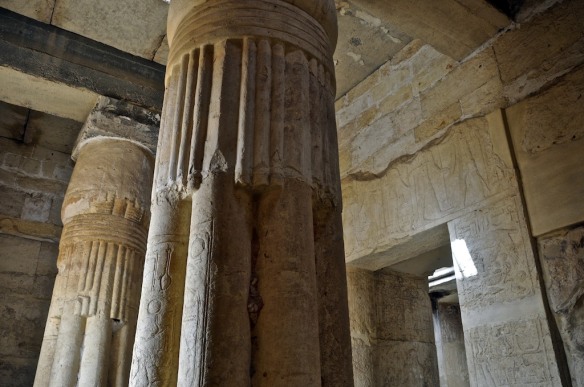 Peoples from prehistoric times to the present found Fayoum to be the land of milk and honey and where the world civilizations came, lived and left their mark.  Medinat Madi is microcosm of Fayoum, a superb example, of a city that stood for thousands of years, and over that time it has drawn to itself millions of people from the Ancient Egyptian to people of every quarter of the world, people of every race and kind.

How to get there:

– follow the track around the headquarters building, and after passing some fish farms, there is open desert again

– this track is well-marked, and bordered by stones, with occasional milestones — follow it to the Madinat Madi Visitor Center. 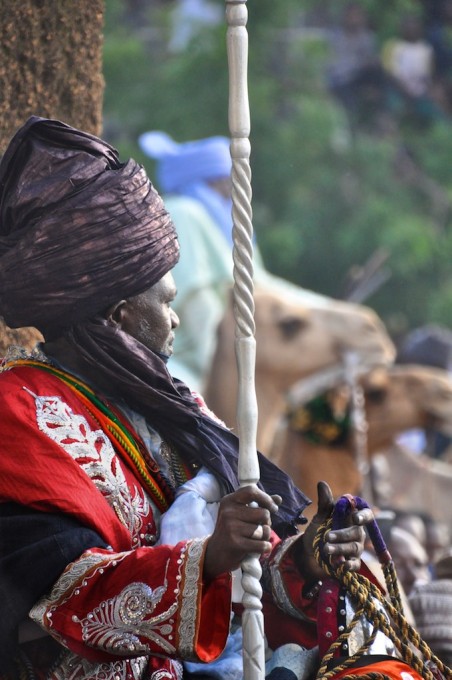 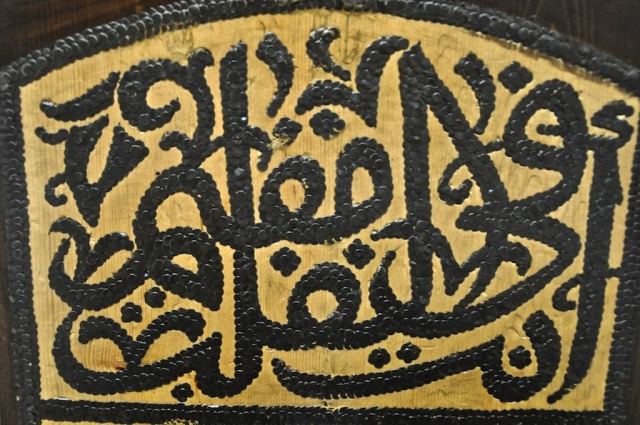 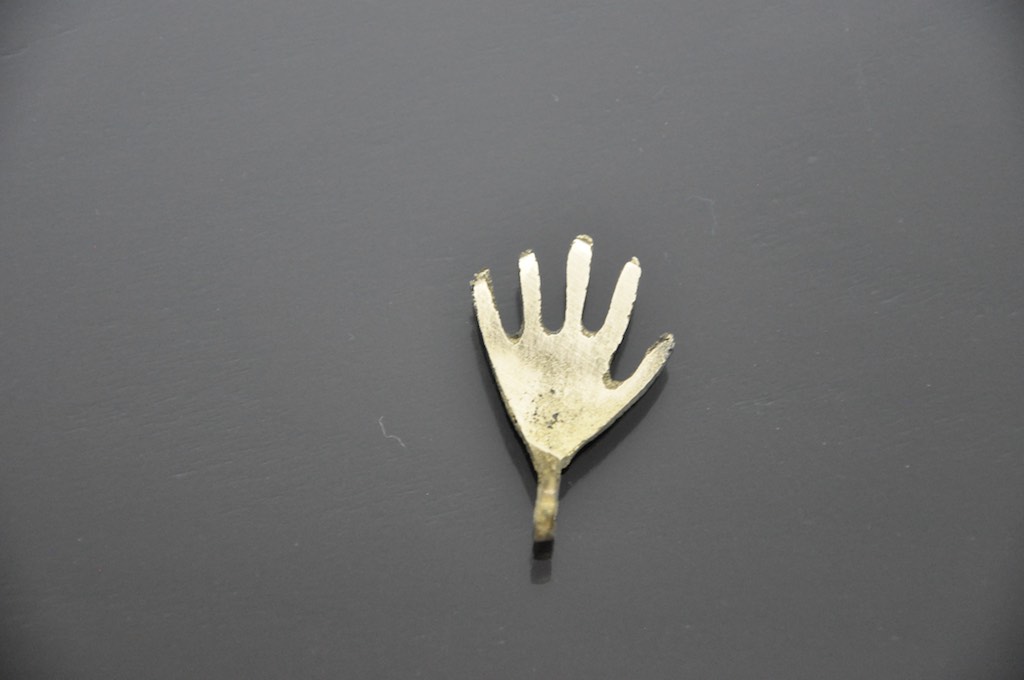 Tools used to make glass beads and bangles by Masaga glassmakers: rod (coated in red mud so beads do not stick to rod - pic 2) to pull and manipulate softened glass; tongs to open glass to form bangle; ceramic bowl of ash to cool beads on completion, spatula to flatten and shape softened glass; bowl of water to cool tools; stick with nails to balance a rod while working with other tools; grain sacks filled with dried grass to sit on. #bida #nupe #northernnigeria #glass #glassmaker #africanstories
Kakaki Trumpeter, a type of horn only used at special occasions to announce the entourage of officials. #bida #nupe #northernnigeria #africanfilm #kakaki #trumpet
Bida Wall architecture. Pic 1 is from 1949 Nigeria Magazine at the Palace of Etsu Nupe. The ceramics are pre-WWII. Pic2 is taken at Palace of Etsu Nupe in 2019. #bida #palace #etsu #africanarchitecture #nupes
Photo from 1949 Nigeria Magazine:Art of Bida Builders. 2nd pic was taken in 2018. 3rd pic are the same small ceramic baked tiles that are shown around the Moorish-style doorway in 1st pic. The ornamental design in mud-relief covers the entire wall of the house. Partial plates or ceramic dish are embedded in the wall. #bida #nupes #africanfilm #africanarchitecture #archecture #ceramic #mudarchitecture #nigeriamagazine
Behind the scenes... sharing a laugh and admiring Bida traditional architecture with resident. Ceramic plates and hand ornamental design in clay are components of Nupe architectural heritage. #bida #nupe #ceramicplates #claydesign #newfriends #nigeriaarchitecture
Tiny 2 colored beads made from raw (bikini) glass and recycled glass. It takes about 10 minutes to form one bead. #bida #nupe #glassmakers #glass #africanfilm #handmadeglassbeads #glassbeads #africanstories #africanstudies #britishmuseum #commonwealth #smithsonianafricanartmuseum