Field Guide to the Street Names of Central Cairo makes its way to New York City for a visit to the Statue of Liberty, a statue once destined to be called “Progress Egypt Carrying the Light to Asia” and stand as a lighthouse at the Suez Canal. The link between Central Cairo, the Statue of Liberty and our book is the Egyptian ruler, Khedive Isma’il Pasha (1863-79). (As one of my readers commented, ‘an intersection between Oriental and Western history.’)  Isma’il Pasha was also the man who declined Frédéric Auguste Bartholdi’s colossal statue design to stand at the Suez Canal and sending its on its way to New York Harbor.

It all started at the 1867 Universal Exhibition in Paris.The best description of the times is from an excerpt by Zeynep Celik , Displaying the Orient:

Although under Ottoman suzerainty since 1517, Egypt acquired a semiautonomous status in 1805, when Muhammad ‘Ali was appointed governor; this status lasted until 1882, the date of the British occupation. Muhammad ‘Ali initiated a series of military, economic, and administrative reforms, relying on the expertise of French and Italian advisers. These reforms were followed by legal and educational transformations and the development of infrastructure (the construction of railroads, the Suez Canal, cities, etc.) under Isma’il Pasha (1863–79), paralleling the changes promoted by the Ottoman rulers in Istanbul. In 1867, the Ottoman sultan conferred on Isma’il Pasha the title of khedive, giving him a special position in the empire and allowing him to sign independent technical and economic agreements with foreign powers.

The 1867 Universal Exhibition in Paris was marked by important visits from Khedive Isma’il Pasha of Egypt….What were the goals in visiting the exposition? Isma’il Pasha pursued a Western model of “progress” and wanted to be recognized for his institutional reforms. Similarly, Isma’il Pasha’s goal was to demonstrate his alliance with Europe by announcing the modernizing transformations in his own country…Isma’il Pasha intent on reshaping their cities according to European models—a goal reflected most dramatically in the physical transformation of Cairo…The city building in Cairo was comprehensive…. A new quarter of Cairo, named Ismailiyya after the Isma’il Pasha extended the city to the west with a design that superposed a pattern of radial streets on a grid. Long avenues ended in squares or ronds-points; monuments and public buildings defined the ends of vistas. The model was once again Baron Haussmann’s work in Paris. Indeed, French architects, landscape architects, and gardeners were commissioned to beautify Cairo…For Isma’il Pasha, who had lived in France, the expedition was an occasion to catch up with the social and physical transformation of Paris.-(Çelik, Zeynep. Displaying the Orient: Architecture of Islam at Nineteenth-Century World’s Fairs. Berkeley: University of California Press, 1992)

Most civilizations utilize monumental figures and heroic sculptures to revere political figures and leaders. The tradition of immortalizing an individual, whether by human representation or by symbol, is a human trait. Governments impress their political heroes and leaders on their public; erecting statues at major intersections and in parks and gardens appears to reinforce both past heroic accomplishments and current ruling dogma. Heroic sculptures and monumental statues are visible reminders of a time in history when these individuals brought about substantial change in society and, in turn, influenced thought. (“Egyptian City 1801–Today.” Cairo’s Street Stories: Exploring the City’s Statues, Squares, Bridges, Gardens, and Sidewalk Cafés, by Lesley Labadidi, American University in Cairo Press, 2008, pp. 39–52. ) However in Muslim countries, human forms on display is subject to question.  Thus at the 1867 Universal Exhibition, Isma’il Pasha took the unprecedented step to interview European sculptors for the purpose of placing heroic, monumental sculptures on the new streets of Central Cairo depicting rulers in his family history.  One such person who submitted a  Frédéric Auguste Bartholdi.

Bartholdi had toured Yemen and Egypt in 1855-56, and upon his return to France received a commission to sculpt a statue of Jean Francois Champollion, the Egyptologist who had deciphered the hieroglyphs on the Rosetta Stone. The statue was displayed in the Egyptian pavilion at the 1867 Exposition Universal in Paris. Isma’il Pasha was impressed with the statue of Champollion and gave an audience to Bartholdi. Bartholdi hoped to build a colossal statue for an immense lighthouse marking the entrance at the opening of the Suez Canal (1869). It was to be a towering figure, dressed in robes and holding aloft a torch. Isma’il Pasha declined due to the cost and that the form was reminiscent of a peasant woman. By 1870 ‘Progress’ had evolved to ‘Liberty’.  Eventually Bartholdi would rework the statue and unveiled at the New York Harbor in 1886. 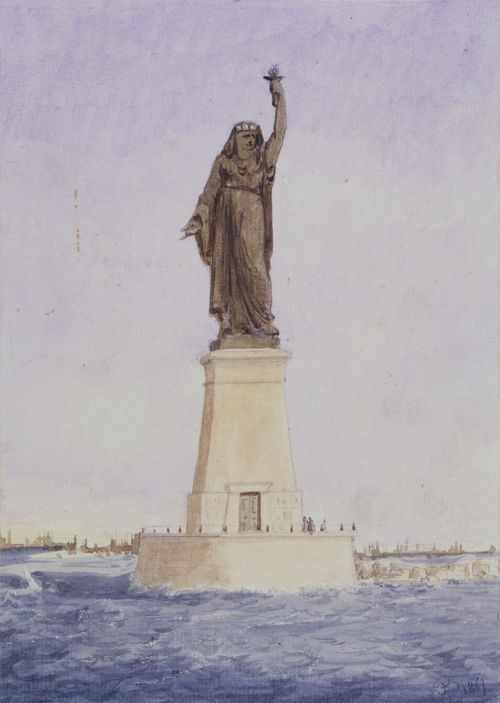 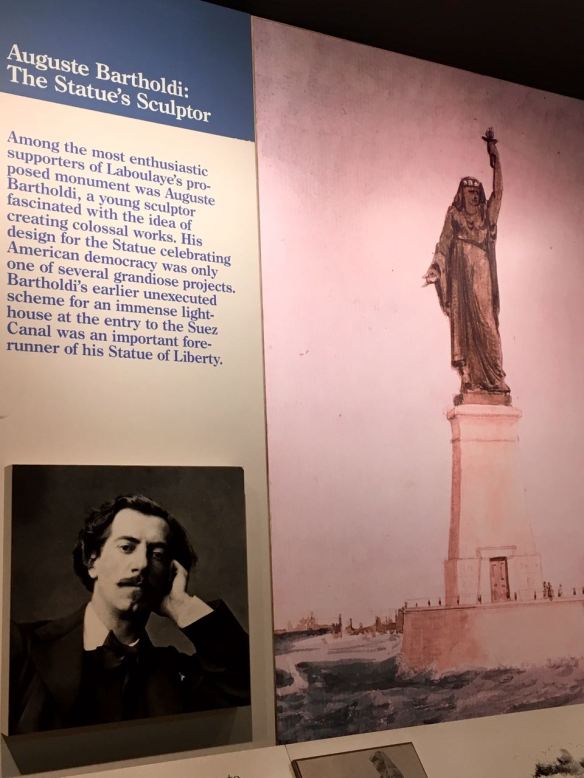 The Statue of Liberty looks very much like Bartholdi’s earlier design for the Suez lighthouse, but the transition required skill and subtlety. From 1878-1875 Bartholdi slowly developed the new Statue. First he decided upon her symbols: the torch, crown, broken shackles and tablet. 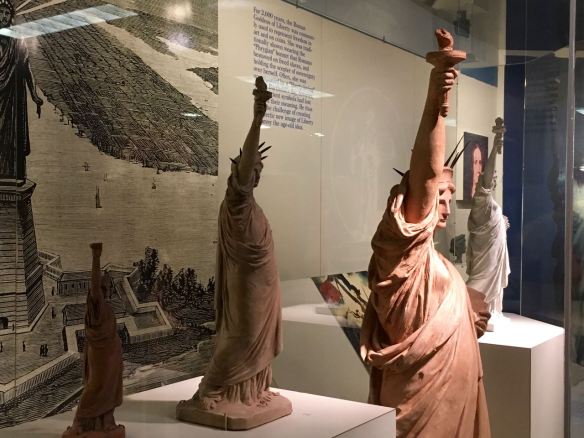 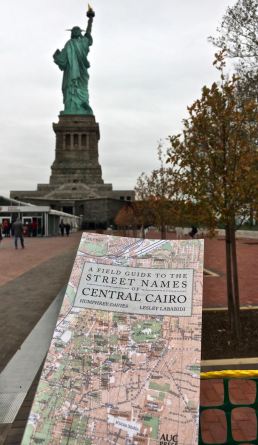 13 thoughts on “The Statue of Liberty, a story of rejection and renewal”